From the RuneScape Wiki, the wiki for all things RuneScape
(Redirected from Dinosaur)
Jump to navigation Jump to search
"Dinosaur" redirects here. For other uses, see Dinosaur (disambiguation).
For the livestock creatures, see Dinosaur (player-owned farm).

Dinosaurs are creatures found on Anachronia and include Slayer creatures assigned by Laniakea and larger Big Game Hunter creatures which require both Hunter and Slayer to take down.

Dinosaurs are high-level Slayer monsters found on the island. They are notable for dropping laceration boots, the bone blowpipe, and the components to upgrade it: blowpipe feather, blowpipe fins, and blowpipe chitin. Dinosaur Slayer tasks are assigned by Laniakea as a cluster slayer task. Each of them have a special attack they use after 6 regular attacks:

Raksha, the Shadow Colossus is a powerful boss located in the oubliette of the Anachronia Swamp Fortress. Raksha does not have a Slayer level requirement to be fought, and does not count for Dinosaur Slayer tasks. He is capable of dropping codices for unlocking the Greater Ricochet, Greater Chain and Divert abilities, laceration boots, blast diffusion boots, fleeting boots and shadow spikes for upgrading the boots to their enhanced variants.

The three Rex Matriarchs–consisting of Rathis, Orikalka and Pthentraken–are boss monsters that can be accessed via a teleportation device found near the spirit grove. Like Raksha, the three dinosaurs do not have any slayer requirement to be fought, but unlike Raksha, they do count for dinosaur slayer tasks. They can all drop the components for creating Laniakea's spear, as well as hearts which are combined with rings dropped by the Dagannoth Kings to create stronger variants, namely the Reaver's ring, Stalker's ring, Champion's ring and Channeller's ring. The Heart of the Berserker can be dropped by any of the three Rex Matriarchs, whereas the Heart of the Archer, Heart of the Warrior and Heart of the Seer are only dropped by Rathis, Orikalka and Pthentraken, respectively. The Rex Matriarchs are unique in that they do not drop laceration boots, and are the only dinosaurs with specific weaknesses.

Wearing a Necklace of Salamancy while fighting normal dinosaurs or the Rex Matriarchs will provide a 15% damage and accuracy bonus and a 3% drop increase for rare items. 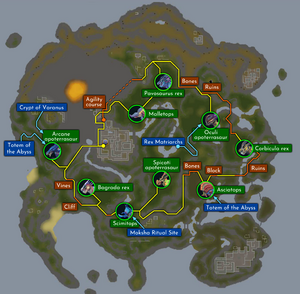 Dinosaurs also include those found in Big Game Hunter. There are nine different dinosaurs to hunt on Anachronia. Each dinosaur has certain level requirements in Hunter and Slayer to be hunted, both of which can be boosted. Each dinosaur also requires a specific bait to be lured, and ultimately caught. The experiences shown in the table are based upon the experience gained after having completed the hunt; when skinning the corresponding dead dinosaur.

Hunting Big Game Hunter Dinosaurs does not count towards a slayer task.