Dimension of the Damned

From the RuneScape Wiki, the wiki for all things RuneScape
Jump to: navigation, search
Not to be confused with Dimension of Disaster.

Dimension of the Damned was a competitive game mode for RuneScape, with the qualifiers accessible after an update on 16 October 2017, lasting until 25 October.[1] It was designed to be played using only NXT client but it was possible to play with the Java client if the player edited a configuration file.[2] Players were required to go through the RuneScape website to access the mode. 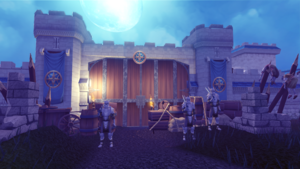 Inside the walls of Falador

Taking place on a separate instance of the main game (accessible through special servers), Dimension of the Damned requires players to survive against hordes of zombies while having max level in all skills and some starting equipment.

Players start the mode in Falador, which is a safe place from the zombies, with Zrik selling supplies and mystery boxes nearby that can be used to survive. While playing the mode, it is not possible to complete any quests, take part in minigames and Distractions and Diversions, or other activities. NPCs that are not specifically part of the mode are not present. Methods of teleportation such as the Lodestone Network are inaccessible. Dungeons and other underground areas cannot be entered in this mode, and only certain parts of the free-to-play surface world are accessible. The Wizards' Tower, the Grand Exchange, Black Knights' Fortress, Karamja, and Daemonheim are all blocked off and inaccessible. The hidey-hole shortcut into Falador is inaccessible due to the lack of rope or sinew material (to create hidey-hole). The ladder by the east wall inside Falador can be used to access the jump wall shortcut out of Falador to the north. The Magic and Prayer tabs are both disabled, restricting players to melee or ranged combat. Additionally, Elder trees and Bloodwood trees are removed from the game.

Outside of Falador, zombies will sense players nearby and rise up from the ground. When travelling as a group, this will happen more often. The aim of Dimension of the Damned is to score a good enough hiscore to place into the top 1,000 players of the mode. Players can increase their score by killing zombies, and will be penalised by having their score multiplier reduced if they die. The mode can be restarted at any time and as many times as desired to try and achieve a top hiscore.

Similar to how Seasonal Deadman Mode works in Old School RuneScape, the top players of the mode will be taken forward into a finale.[3] This will be indicated to players through the Message Centre and an email.

There are 6 types of zombies players can encounter.

The session goals consist of killing a different amount of zombies. Each completed goal will grant the player bonus points. To achieve 250 zombie kills within one session, a player only needs to tag (one to two hits) zombies while fighting with multiple players as the number of players guarantees the kills. This allows a player to tag as many zombies as possible within a session time and participate in each kill. Completing all of the session goals in one session rewards the player with the RIP Axe override.

Completing three sessions of the mode will reward players with the outfit that is worn while taking part, the Survival outfit. By completing all of the possible goals during a single session, players will be rewarded with the RIP Axe cosmetic override.[4] The rewards were given out 27 November 2017. 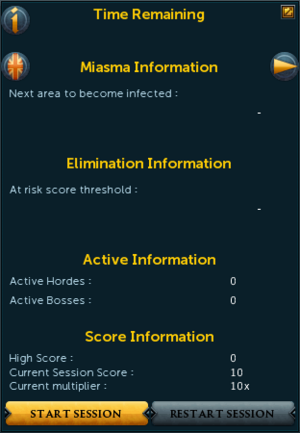 The interface used in the finale

During the finale, players had to start from scratch and did not retain any of the items that they previously had. Instead they were given mithril level tools on their tool belt, 5,000 bottle corks, a steel 2h, a steel platebody, steel platelegs, a studded body, studded chaps, a willow shortbow, 100 steel arrows, an antidote, and modified shrimps. Zombie spawn rates were increased as well. More supply drops were spawned, containing runite equipment or better, though only the first 20 players to open a drop would get the rewards. They also infected the player with zombeism.[7]

Players had a few minutes to prepare before they had to leave Falador. Upon leaving, they were not able to return to the city. Attempting to leave Falador before the game started prompted the message You can't leave yet. Boss zombies used area of effect attacks rather than single attacks that were used in the qualifiers. Zrik's store was available from multiple locations in the world, notably around the outside of Falador.

To win the game, players must either be the last alive or the highest scorer if the time limit of the finale is reached. 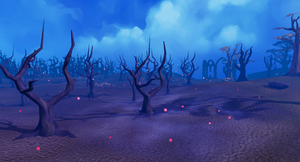 The miasma during the finale

Like the normal mode, players have to kill zombies to gain points. Every five minutes, up to 70 players with the least points are eliminated from the game. Additionally, coming into contact with the "miasma", which acts as a border of the player area, killed players if they stood too long inside of it.

Miasma spread to various areas regularly, indicated by the message [Location] will be overrun soon. If players tried to enter the miasma, they received the message The miasma is too thick to breathe! and began taking damage.

All players who make it through to the finale of Dimension of the Damned will receive an exclusive title called [Name] the Damned.[4]

Prizes are given for the last 50 players remaining in the finale. Rewards are cumulative; players that are in the top 5 for example will receive the rewards for that group, and the top 10 rewards.

The following were the top five players in the finale:[8]

Some scenery and message have different variation than in the current version of RuneScape:

It could be infested with zombies up there! It wouldn't be a good idea to investigate.

It could be infested with zombies down there! It wouldn't be a good idea to investigate.

Death has abandoned us now. You will find no safety here.

This portal has become unstable in the chaos. There is no telling what might happen of you were to pass through.[sic]

The finale was originally meant to take place at 18:00 game time on 28 October,[9] however this was postponed to 4 November because of changes that were made to the finale.[10] This caused criticism amongst some players due to the finale coinciding with BlizzCon. The finale was then pushed back to 18 November, with Jagex citing the need to work on balancing as the reasoning.

There was a lot of criticism from players during the finale of the event. Players were able to create new accounts to login to the servers, despite having not qualified to participate. This meant that they could trade items such as corks to their main accounts, or use the account to take part. Before the event started, players could abuse bugs to leave the safe area of Falador early. Players were able to purchase "loot boxes" in Zrik's shop using the bottle corks that they started out with, which was seen as unfair by some players and not representative of player skill, as the items gained from them were completely random.[11][12][13]

As soon as the finale started, the miasma engulfed Falador, including Falador Park, and started damaging players, eliminating a large amount of them. Players criticised the lack of time they had to leave the vicinity. The miasma was also barely visible, especially at lower graphics settings, meaning that players could only really know that they were near it by entering it and becoming damaged.[14][15]

Jagex publicly acknowledged the issues that the finale had during the end of the stream and promised to put out a news post or forum thread about it at a later date. They also indicated that all 1,000 players that made it to the finale will receive the pet that would originally have been given for the top 50 players. This was confirmed shortly after by an official tweet.[16] Mod Sayln made a post on Reddit the next day to explain what had happened and to apologise for the issues. He noted that the issues with the miasma surrounding Falador is because the server was already in a "finished" state, with the gamemode having started prematurely on the day the finale was held.[17]