Dimension of Disaster: Coin of the Realm

From the RuneScape Wiki, the wiki for all things RuneScape
Jump to: navigation, search
This article is about the subquest. For the achievement for completing this subquest, see Dimension of Disaster: Coin of the Realm (achievement).

Coin of the Realm is the initial subquest of Dimension of Disaster during which the player discovers the portal to another dimension.

Talk to Aris in her tent in the southwest section of Varrock Square. She demands a gold coin for a fortune telling. After she does that you will get a coin. When you interact with the coin a menu will pop up. Select flip coin, and the coin will change into a double-headed coin. Talk to Aris again, and she will tell you to throw it in the fountain in Varrock square. When you throw it in the fountain a Dimensional portal will open up. Step in the portal, and you will be teleported to New Varrock, where you are greeted by the Image of Zemouregal and all your prayer points are drained. 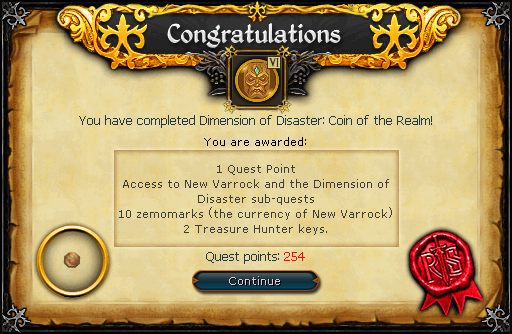 Dimension of Disaster: Coin of the Realm is directly required for the following quests/miniquests: