The Dig Site is the first quest in the Return of Zaros series. You must pass an archaeology exam for the Varrock Museum to be able to excavate the site where the city of Saranthium previously stood, but you discover something else...

"There's gold in them there hills" (well stream actually), as well as many other items that can be found at the Digsite. Join the students in their attempts to be a qualified archaeologist, and become experienced in making the earth move!

Have you got what it takes to unearth the hidden altar to one of Runescape's lesser-known Gods?

The Varrock Dig Site is located east of Varrock, north of Al Kharid. Go to the Exam Centre located south of the Dig Site. Talk to an examiner and ask her about taking an exam to be eligible to do work on the important areas of the Dig Site. She will then give you an unstamped letter. Bring this letter to Seth Minas (site manager) in the building to the north west of the exam centre (main building with the cups of tea).

After he signs it, bring the sealed letter back to the examiner, who then gives you the level 1 test.

No matter what you answer on the test, you will get all of them wrong. You must get answers from the other students. They are all wandering around the Dig Site. Leave the building and head north towards the Dig Site.

There are 3 students at the Dig Site who can help you with the exam answers. However, they will only give you the answers if you can find a lost item of theirs.

This can be done in any order. You can obtain the 'special' items before talking to the students.

A map of the Dig Site

The first student is Eduardo (student) and is in the north-western section of the Dig Site. He has blonde hair and is wearing a bandana over his mouth. He has lost his animal skull and wants you to retrieve it. Pickpocket any Dig Site workmen that can be found nearby until an animal skull is received; level 25 Thieving is required to steal it, and a higher level will increase your chances of receiving it.

Give the skull back to Eduardo and he will give you another answer – "Earth Science is the study of earth, its contents and history." 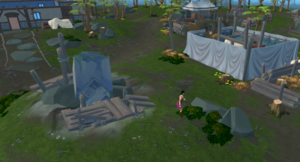 Searching the bush with the teddy

The second student is Katarina (student) and is in the north section of the Dig Site. She is a blonde woman with a purple top with two pigtails. If you talk to her, she says that she has lost her teddy bear, which she describes as her "lucky mascot" and asks you to find it. The teddy bear is in one of four bushes by the mysterious monolith, south of the student.

Once the teddy has been found, return to Katarina and she will tell you one of the answers – "The proper health and safety points are: Proper tools must be used."

Items needed: A cup of tea 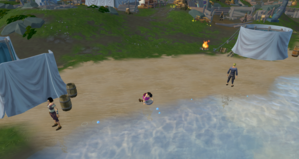 Panning for the special cup

Go to the eastern area of the Dig Site. First, find Dorian (student) wearing a brown coloured shirt with green pants, standing in front of the The Empty Throne Room entrance north of the panning area. He will tell you he has lost his special cup. Attempt to pan the river just east of the tent. The panning guide will stop you and ask for a cup of tea.

If there is already a cup of tea in your inventory, he will automatically take it, however if you do not have one, a cup of tea may be found in the main administrative building to the west of the dig site.

After gaining permission, pan in the river until you obtain a special cup. You may also find an uncut opal, which is needed for a later part of the quest. Other items you might find when you search a full pan include uncut jade, coins, gold nuggets, oysters, and just plain mud.

Return the cup to Dorian and he will give you the final answer – "The people eligible to use the Digsite are: All that have passed the appropriate Earth Sciences Exams."

You must talk to each of the students before taking each new exam, otherwise the correct answers below will not even appear as an option!

Go back to the exam centre and take the exam again, this time choosing the correct answers. If you have forgotten the information, they are as follows:

The study of Earth Science is: "The study of the earth, its contents and history."
The people eligible to use the digsite are: "All that have passed the appropriate Earth Sciences exam."
The proper health and safety points are: "Proper tools must be used."

If it is done right, you will receive a level 1 certificate and a trowel as a reward.

Return to each of the students and ask them for level 2 answers, which are as follows:

Once again, talk to the Examiner for the test and after passing it, you will receive a level 2 certificate and a rock pick.

Speak to the three students again and obtain the answers for level 3 certificate. However, Katarina (in a purple top) will want an uncut/cut opal for her help this time. Pan in the river for one, if you did not receive it when you were looking for the special cup. It is also possible to receive a cut opal from excavating level 1 grids.

Sample preparations: "Samples cleaned, and carried only in specimen jars."
Specimen brush use: "Brush carefully and slowly using short strokes."
The proper technique for handling bones is: "Handle bones very carefully and keep them away from other samples."

Now go back to the exam centre. Answer the questions correctly and you will earn the final level 3 certificate, along with a specimen brush and jar. You can now dig anywhere you wish; you can also show all the 3 certificates to Seth Minas and choose between something to drink (fruit blast) or something to eat (chocolate cake), as a reward. 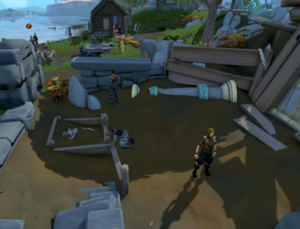 Digging in a level 3 dig area.

You now need to use the trowel to dig into the soil at the level 3 site, which can be found on the east side, near student 3. Click on the soil until you find an ancient talisman. This can take multiple attempts. Any other items can be discarded.

Take the talisman to the Terry Balando in the exam centre. He will be impressed by it and say that it's a talisman of the god Zaros. He will give you an invitation letter, which must be shown to workers to get permission to go down the private winches. 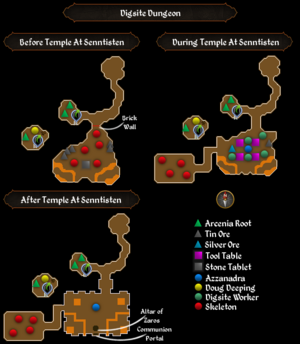 A map of the Senntisten Temple.

Make your way to the northern-eastern digging area of the Dig Site (directly north of dig site level 3) and you will see a winch near the top of it. Talk to the Dig Site winch operator next to it. Afterwards, attach a rope to the winch in order to gain access to the sub-levels of the Dig Site.

Grab an arcenia root near the west wall while you're there as you'll need it later. Walk east and search the bricks blocking the path; it is currently impossible to pass through until the bricks are cleared.

Return to the surface and head to the other winch, located to the west. Once again, use your rope and go down the winch. Speak to Doug Deeping and inquire on how to move a large pile of rocks. There are also two arcenia root spawns in this area, against the western wall and north-western corner.

He suggests blowing the bricks up, and also speaks of a former colleague who had discovered some chemical substances to use for that process. However, he was scared by his findings and left them inside the other shaft. He also gives you a chest key. Use the 'drop trick' for multiple keys if you want to obtain more compounds after completing the quest.

Make your way to the bigger dungeon down the north-eastern winch. 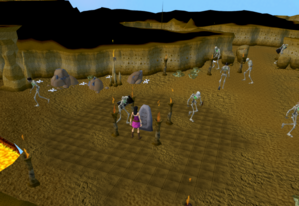 After the quest you will not be able to get more ammonium nitrate since Doug Deeping will not give you another key, so be sure to get a lot of it if you want more chemical compounds. You do not need to keep getting a key from Doug, you can just keep clicking on the chest whilst it's open.

Now search the bricks to the south and use the chemical compound on it, and immediately after that, search it again and use the tinderbox option to blow it up; you will automatically run away. Enter the central chamber. Pick up the stone tablet in the centre of the Zarosian sign and go back to Terry Balando. Then, show the stone tablet to him to finish the quest. 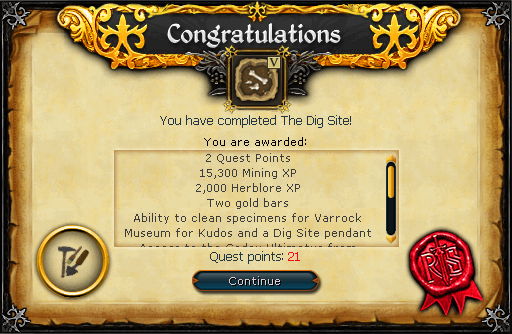 The Dig Site is directly required for the following quests/miniquests: