From the RuneScape Wiki, the wiki for all things RuneScape
Jump to navigation Jump to search
The Old School RuneScape Wiki also has an article on: osrsw:Diango's Workshop 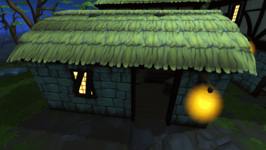 The former entrance to Diango's Workshop. Currently it serves as the hideout of The Skullery

Diango's Workshop is a small area in Draynor Village that is currently inaccessible.

It is used for holiday events, and has so far been used in the 2005 Christmas event and the 2006 Hallowe'en event. Although it is not accessible, it can be view using an Orb of Oculus at the Pyramid Plunder minigame, by entering the third room (requires level 41 on Thieving) and looking southeast with the orb. It could also be seen in the 2011 Easter Event by climbing up the stairs to the Stone spirit and looking east with the orb. 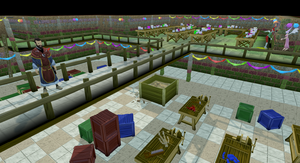 The workshop has two floors and a small third floor that was used in the Hallowe'en Event. The upper two floors have yellow floors, brick walls, and paint splattered around. The northern portion of the top floor of the workshop has three tables arranged with paint. The southern portion of the upper floor had boxes. There was a long bridge spanning the place from north to south, and side areas.

On the lower floor were several long tables. The lower floor was only accessible for the Hallowe'en Event, and was a small alcove under the Haunted Tree.

In Christmas of 2005, Diango opened up the workshop after his Pixies repeatedly failed to create the toys correctly. The workshop was populated by seven pixies, Rosie, Cait, Sorcha, Donnacha, Ronan, Fionn and Cormac. There were many tasks that the pixies needed completed.

Diango's Workshop as seen during the 2005 Christmas event.

Baubles were found in Diango's Workshop (southern portion) or they were dropped by imps north of Falador and west of Varrock (who were temporarily dressed in Santa garb for the season). Inside the workshop, the player went to the northern tables, where they could paint them. The player then could either put them in boxes and give them to the Mysterious Man at the members gate to Taverley, or put them on the Christmas Tree in Varrock, that replaced the fountain. 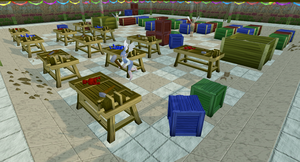 A view of the marionette carving tables.

The player could also go downstairs to the wide tables and create a marionette by assembling the various parts. The marionettes were then placed in a box and delivered to the Mysterious Man at the members gate to Taverley. 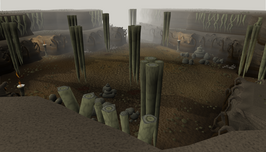 The bottom of the workshop, overgrown with roots from the Evil Tree.

The Workshop looked worse for this appearance. The lighting was slightly worse than during Christmas, and the central bridge had been destroyed about halfway along it by the Haunted Tree. The lower level's tables were absent, and the tree, with two faces and two roots, stood in the centre. Players could yank the roots and enter the small basement, where they could hack away tree roots from below it.