Devious Minds is a short quest involving a plot against the clergy of Entrana. This was a standalone quest until it was tied into the Return of Zaros quest series by The Temple at Senntisten, released four years later.

No one likes to miss a good ceremony; least of all a poor lowly monk who needs your assistance! Will you be able to aid him and make his dreams come true?

Speak to the monk just outside Paterdomus, the temple on the River Salve. It is east of the Silvarea mountain range and can be reached by walking east from the ruins of the Earth Altar, or west from Morytania; the closest fairy ring is CKS. Alternatively, players can teleport to Paterdomus using the Invitation box if they have completed the Missing, Presumed Death quest.

The monk requires a new, stronger weapon for a certain group of warriors in order to secure more victories. He wants the player to make a bow-sword. 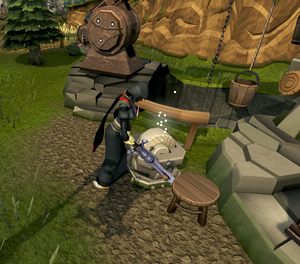 To make this bow-sword, take a mithril 2h sword to Doric's house, just north west of the Falador lodestone, and use it on the whetstone outside to make a slender blade. Then attach a bowstring to make the bow-sword.

When the bow-sword has been made, go back to the monk. Use the balloon transport system to fly back to the Earth Altar for 3 charges, if the Varrock destination has already been unlocked, and ten sets of willow logs if not. Alternatively, use a wicked hood or Wicked hood teleport token to teleport to the Earth Altar or the Invitation box to teleport to Paterdomus. Additionally, if all other methods are not available, a Lumber-yard teleport scroll can be used. As a last resort, use the Canifis lodestone and run west, then go through the mausoleum.

A gift for Entrana[edit | edit source]

Give the bow-sword to the Monk and he will be grateful for it, although he needs one more favour. A special ceremony is to be held on the island of Entrana, though unfortunately the monk cannot attend it and he wants to give them a special present to mark the occasion.

He gives an orb to deliver to the church in Entrana. For the surprise to work, the player must sneak into the church and not be seen entering the island. He advises using the realm of the Abyss to get to the Law Altar on Entrana; he also wants the player to keep the orb in a vessel from the realm to avoid it from being damaged. To do this, hide the orb in a large pouch (will only work if the pouch still has capacity of 9), thus creating an illuminated large pouch (the large pouch will be lost).

There are only two possible ways to get to Entrana with the orb. Trying to use the balloons network system or the wicked hood will not work, as the monks or balloon assistant will ask about the "pouch and its contents". You can reach Entrana either through the Abyss or through teleporting using a Law altar teleport after putting the orb into the pouch. As usual, no other weapons or armour are allowed on Entrana, so bank them before travelling.

If you choose to travel through the Abyss, it is recommended to read up on how to get to the centre ring. The Abyss is accessible through a teleport from the Mage of Zamorak, who is located in the Wilderness just north of Edgeville. Enter the Abyss to reach the Law Altar, and through it, Entrana. 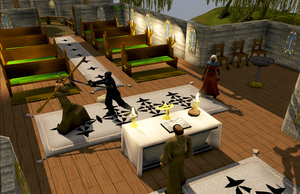 On Entrana, head to the church at the heart of the island and use the large pouch on the altar. A cutscene ensues, wherein the monks are walking towards the altar to begin the ceremony, one of them holding a mysterious relic, when suddenly an assassin wielding the bow-sword teleports in, swiftly kills the monks and steals the relic. Unfortunately, the orb was a teleportation device that uses ancient magic, which allowed the assassin to sneak into the holy island unhindered.

After the cutscene, talk to the High Priest, who'll forgive the player, noting that it wasn't their fault, and tells them to return to the monk at Paterdomus to investigate. 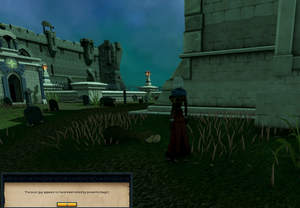 The dead monk at Paterdomus

On arriving back at the Paterdomus temple, the monk helped earlier is gone, replaced by a dead monk. Searching the body reveals that he has been killed by powerful magic, and is not the same person from earlier.

Go back to Entrana and speak with the High Priest again. Upon hearing about the strange events, he asks the player to contact Sir Tiffy Cashien at the Falador park. Locate Sir Tiffy sitting on a bench and tell him about the incident; he too seems puzzled, and promises to investigate with his Temple Knights resources. 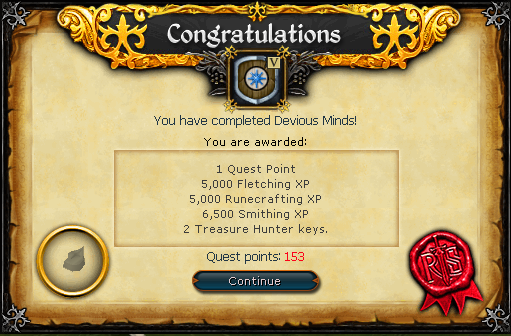 Devious Minds is directly required for the following quests/miniquests:

Devious Minds
The music that plays when the relic is stolen.