From the RuneScape Wiki, the wiki for all things RuneScape
Jump to navigation Jump to search
The RuneScape Classic Wiki also has an article on: classicrsw:Devious MUD

DeviousMUD (Devious Multi-User Dungeon, also known as Devious MUD, Devious-MUD, Devious Mud and devious-mud) is a game developed by Andrew Gower during the second half of 1998 and first half of 1999. While Andrew described this graphical MUD as a "tech test" which had "barely any content", it holds significance as the game eventually evolved into RuneScape, with various elements being adopted. Even though a version of DeviousMUD is still owned by Andrew Gower, there are no plans to make the game accessible to a wider audience as "it isn't finished and doesn't work properly, and has no deployment mechanism, and would probably break if more than 10 people tried to play it at once". As a result, information and knowledge about the game is limited: during its beta release in 1999 only about 20 people ever played the game[1], and since then it has only been shown twice (at RuneFest 2010 and in the RuneScape: 15 Years of Adventure documentary).

When Andrew Gower started his bachelors in Computer Science at Fitzwilliam College in Cambridge in 1997, he already had seven years of experience in programming games. Making use of Basic, 68000 Assembly, C and x86 Assembly, he first started out recreating existing games for his Atari ST. After a few years of doing this, he had joined forces with his brother Ian in Cunning and Devious Games. With this company they managed to have some small success, and even commercially published the game Destruction Imminent. Following the publishing of this Atari game, Andrew moved onto programming games for Personal Computers. The year Andrew started in college, he also started producing online Java game applets for websites.

The homepage of DeviousMUD in November 1999.

Inspired by the text-based Multi-User Dungeon games (MUDs) played by other students at his college in Cambridge and having been introduced to Nanvaent by his brother Paul, Andrew set out to create his own text-based adventure game in July 1998 [2] using his newly acquired Java programming skills. To stand out from the majority of existing MUDs, Andrew decided to use his knowledge in building graphical games: he expanded his MUD with a point-and-click interface and live graphics, partially inspired by Ultima Online. In doing so, he joined the select club (including EverQuest and Meridian 59) of graphical MUDs, now commonly known as MMORPGs.

Part of the homepage of DeviousMUD in February 1999.

After a short break in the development, Andrew started work on his MUD again in early 1999. He spent most of his time redesigning all the internal file formats used, making the game much more extendible and easier to edit. A list of all known updates can be found at 1999. Two things stand out when comparing screenshots of the earlier version of DeviousMUD and the beta. First, the interface now has red highlights, probably indicating shortcut keys. Second, walls would no long fill an entire tile, but rather fill one side of the title. This allowed for much more realistic maps. On 28 March 1999 the beta of DeviousMUD was released, during which about 20 people would test the game, some from the gaming portal Games Domain. It is not known exactly how long the beta lasted, but it is likely that we have to think in the order of days rather than weeks. At the time, he linked to DeviousMUD from his personal homepage [3].

Once Andrew had collected enough information during the DeviousMUD beta, he removed the client from his website and took a break from developing the game. During this period he focused on developing other Java games on a personal title, and worked in a summer holiday job at GamesDomain, where he designed multiple multiplayer Java games for their website and did other programming tasks. An important milestone during this period was the launch of GamesDomain Castle, a succesful multiplayer online gaming suit, on 1 November 1999.

In October 1999, Andrew started a rewrite, this time with his brothers Paul and Ian as Jagex. A number of changes were made, and the game was renamed RuneScape in early 2000 . Four people (Rab, Lightning, Merlin and Gugge) were invited to alpha-test the game along with the three brothers during the year 2000. On 4 January 2001 the RuneScape beta release, which is now known as RuneScape Classic. This game used a map close to the map design for DeviousMUD, although mirrored. 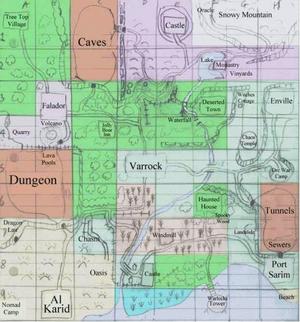 The original world map designed for DeviousMUD, although not implemented at the time of release. This map is strongly inspired by Nanvaent, with the haunted house, tree village, waterfall and windmill in similar areas of the game.

DeviousMUD did not yet have a lot of content available, as its early stages of development were mostly focused on the stability, expandability and usability of the game engine itself. The little content available gives some insight into the way it was inteded to fulfill its premises: players would have been able to create a charactor[sic] and explore the world, complete quests, fight monsters, collect treasure and learn new skills. While it is hard to determine the intended focus of the game, it is likely that it would have revolved around the battle between good and evil (much like the original intention of RuneScape Classic). While most of the ideas, skills and world map were never introduced into this version of the game, most would be introduced into RuneScape Classic between 2001 and 2003.

During the beta release of DeviousMUD players were only able to explore a small part of the designed worldmap. On this map players could encounter a non-completed version of the Sheep Shearer quest, two shops[4], two monsters and about twelve different items. While players were able to see their eighteen skills (Attack, Defense, Strength, Hits, Ranged, Thieving, Hiding, Prayers-Good, Prayers-Evil, Sorcery-Defence, Sorcery-Offense, Cooking, Fishing, Woodcutting, Firemaking, Fletching, Smithing and Mining) in the stats interface, they were unable to advance their levels in these skills: level advancement and nearly all skills (except for melee combat) had not been implemented yet.

Every new player started in a town which is also described as the starting zone. While the name of this town is not known through existing in-game references, we can deduct that this town must, in fact, have been Varrock. The central location of Varrock on the original world map design, forest towards the west and early implementation of Varrock upon release of RuneScape Classic all point to this conclusion. The town itself features multiple buildings, including two different shops. A chain mail body spawn could be found on a tower somewhere inside the town.

Part of the forest.

A forest is located directly west of this starting zone. Added on 25 March 1999, the forest features two types of monsters and at least three item spawns: a square shield, kite shield and arrows can all be found here. Towards the north, the forest is delimited by a fence.

One of the sheep in the fields near Marcus.

Aside from this town and forest, the game contains an area featuring sheep herder Marcus in his house, as well as his pastures with sheep. It might have been added to the game following the quest compiler tests on 16 and 17 February 1999, as the area contains an incomplete version of the Sheep Herder quest. Even though the quest was not yet fully implemented, Marcus already mentions The Thing in his dialogue. While it is uncertain where this area is located relative to the other areas, it might be located south from these areas as the only video in existence enters this area from the north.

As no complete list of items in DeviousMUD survives, in-game images, the playthroughs at RuneScape anniversary commemorations and text references have to be used to find information about available items. So far, evidence suggests that only twelve items were obtainable, which also happen to have the first twelve item-identifiers in RuneScape Classic. No evidence has been found which support the existence of any later items. All items known to exist in DeviousMUD are displayed in the table below. In this table item names are often extrapolated from the available information, and not direct knowledge. Furthermore, it is important to note that no information on the metal used in this equipment has been found so far.

A player could carry a maximum of 28 items in their inventory at once. Armour and weaponry equipped by the player did not fill the inventory of the player. While items could be picked up and dropped, items could not be traded directly between players. However, spare items could be sold to store owners for half the price charged in the store.

DeviousMUD had a very rudimentary and incomplete combat system. Players were able to attack monsters and other players only using melee, as magic and ranged were not implemented yet. To win a fight a player had to drain their opponents hitpoints to zero by hitting the opponent, generating randomly generated numbers in the form of "damage". Whether weapon stats (Weapon Class and Weapon Power) and armour stats (Armour Class) had any effect on this damage output is not known. While the basic melee mechanics worked most of the time, player vs. player fights would occassionally get stuck in a loop and weird effects could sometimes be experienced upon death. As such, even melee combat may be considered to not have been fully functional yet. This can also be observed in other mechanics related to the combat system: any health lost in fights could for instance not be regained through natural regeneration or eating food.

Every player starts out with level 10 in attack, strength, defense and hitpoints. Using these skills they are able to kill two types of monsters: beetles (6 hitpoints) and wolves (though these might also have been named dogs).

DeviousMUD was written in a very expandable way using script files to make the game much more extendible and easier to edit. The isometric style engine with 8 way scrolling supported 3-dimensional maps with hills, valleys and multi-levelled buildings. The game was entirely written in Java and could be played using two methods: by running a Java ARchive (JAR) on your PC directly (which gave you a resizable window), or through a Java applet on the website. This client connected to a main server - a computer running in Andrews room. In implementing this, the network code was heavily optimized to increase performance, and decrease lag. This meant that the game needed as little as 0.3k/sec bandwidth for smooth gameplay.[5] As you played and encountered new objects or entities, additional graphics were loaded from the server. This minimized initial loading times.

When first logged in, a player would encounter the charactor[sic] creation screen, in which they could change the sex (male or female), head (male: no facial hair, mustache, beard), body and legs of their charactor[sic]. They would then go on to spawn in the starting zone. At every login, a player would receive the following message: Welcome To DeviousMUD By Andrew Gower. Communication with computer controlled charactors[sic] (NPCs) was done using the same multiple choice conversation system as in RuneScape Classic. The user interface also had seven options (Examine, Take, Drop, Use, Trade, Attack, and TalkTo), but it is not known how the interaction with these options worked.