From the RuneScape Wiki, the wiki for all things RuneScape
(Redirected from Desert pantheon)
Jump to: navigation, search
Item JSON: {"edible":"no","disassembly":"no","stackable":"no","stacksinbank":"yes","death":"alwaysinclwild","name":"Desert pantheon aura","bankable":"yes","gemw":false,"equipable":"yes","members":"yes","id":"39297","release_date":"28 November 2016","release_update_post":"Premier Club - Buy Now (2016)","lendable":"no","destroy":"You can reclaim this item from the Loyalty Shop.","highalch":false,"weight":0.001,"lowalch":false,"tradeable":"no","examine":"An aura that generates charge once per day, allowing you to commune with the Desert Pantheon Gods. It will gift you a boon of your choice.","noteable":"no"}

The desert pantheon aura is an aura that was available with the 2016–2017 Premier Club. Players who did not already have it can craft it by combining 2,000 desert pantheon fragments. 50 fragments can be earned each time all the objectives in a Shifting Tomb are completed. Alternatively, it can be purchased with 2 bonds. For those players who had the 2016-2017 Premier Club, the aura is reclaimable for free via the Loyalty Programme Shop in-game.

The aura generates charges that can be spent on a variety of different effects. It starts with 0 charges upon creation and generates 250 charges each day, storing a maximum of 500 charges. It does not recharge until the player logs out and back in or switches worlds.

The aura is not found in the Aura management interface and is instead an item that is equipped in the aura slot. Other auras can be active at the same time as the pantheon aura, with the exception of the Wisdom of Scabaras effect.

The effects can be chosen by right-clicking the aura in the inventory (or clicking it while it is equipped) and choosing the "Commune" option, which opens the following interface. 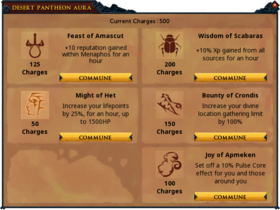 Interface of the desert pantheon aura

Wisdom of Scabaras requires the desert pantheon aura to be equipped. Additionally, unequipping the aura cancels the effect. Wisdom of Scabaras cannot be used during double experience weekends; attempting to commune with Scabaras during a double XP weekend generates a chatbox message reading "Double XP is already active, you don't need to activate this aura."

Desert pantheon aura is an aura that was available with the 2016–2017 Premier Club. The aura became unusable after 31 December 2017[1]; however, users who purchased Premier membership after 31 December 2016 were able to continue using the aura until the last day of their Premier membership (i.e., sometime in January 2017). During 2017, losing membership status, regardless of whether or not it was regained, would also result in the aura becoming unusable. Upon attempting to use the aura in its unusable state, the player received a game message that read, "You no longer hold the power to commune with the Desert Pantheon Gods."

Prior to the release of Menaphos, the Feast of Amascut was unusable, as in her absence from Menaphos her power had been "dissipated" from the aura. Amascut's effect was released along with Menaphos on 5 June 2017, but was not usable until 12 June 2017.

As of 24 February 2020, the aura was made re-obtainable for players who did not already have it by combining 2,000 desert pantheon fragments.

Upon re-release on 24 February 2020, the following option was removed from the aura.