From the RuneScape Wiki, the wiki for all things RuneScape
Jump to navigation Jump to search
The Old School RuneScape Wiki also has an article on: osrsw:Denath
Denath? (edit)? (edit)

Denath is the humanoid form of the weather demon Agrith Naar, trapped on Gielinor in the form of dark wizard by Ellemar and his companions. His goal is to summon demons from Infernus and ultimately return there so he can once again control Gielinor's weather. 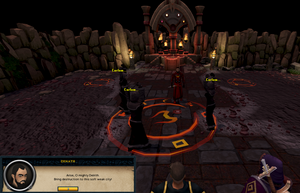 He is first seen during Demon Slayer, leading a group of wizards and monks in the summoning of the demon Delrith. To do this, he had stolen a book on demonology from the Edgeville Monastery that could be used to summon the immensely powerful demon Delrith. Gideon Bede, an occult scholar and caretaker of the Monastery's library, pursued Denath, thinking the book his responsibility. He and an adventurer confronted Denath while he and some of his cultists were summoning Delrith in a crypt beneath Varrock. He succeeded and quickly escaped before Delrith arrived. Delrith was then re-banished by Gideon and the adventurer in the ensuing fight, causing the crypt to collapse.

He kept his head low for a fair amount of time, but two monks, Father Badden and Father Reen, kept an eye on him. When the same adventurer aided a clay golem at the ruins of Uzer in opening a portal to Thammaron's demon realm, Denath and his newly formed gathering set up camp there, for is easier to summon demons in a demon realm. Instead of summoning Delrith again, he had a much darker plan with his new cult. 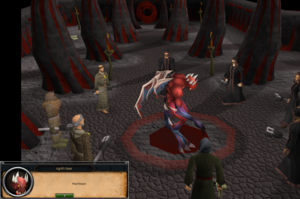 Denath returns to Gielinor from the Infernal Dimensions as Agrith Naar.

During Shadow of the Storm, it is revealed he has fled to the ruins of Uzer, where he has been building up a following of supposedly evil, but actually quite friendly, people. Under his guidance, they perform what they believe to be Agrith Naar's summoning ritual. As the group completes the ritual, Denath is transported to the Infernal Dimensions, revealing himself to be Agrith Naar. This also explains his relation to Delrith and the similar marks on his chest. After most of the members of his group get killed either by monsters or the storms he caused, the same adventurer who killed Delrith summons him with a new group of people and defeats him. At the summoning, however, Agrith Naar kills Matthew, a former member of the group who had aided the player during the quest, after already having killed Josef in between the events of quests. As Agrith Naar dies, he and thus Denath are gone for good.

After the graphical update of the stone circle south of Varrock, he's the first unfriendly non-player character to be killed after getting away in the previous quest.