From the RuneScape Wiki, the wiki for all things RuneScape
Jump to navigation Jump to search
For other uses, see Demon Slayer (disambiguation). 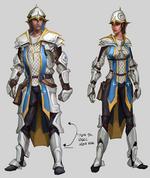 Demon slayer equipment is an experience-boosting set. Its components can be obtained as drops from Demon Flash Mob bosses and from Kal'gerion demons. It requires level 60 Ranged to wield the weapons and 60 Defence to wear the armour. The armour is classified as power armour. Although the crossbows require level 60 to wield, they act as tier 57 weapons.

Each equipped piece of the set provides the following effects when fighting demons, apart from the exceptions listed below:

Despite the valuable effect the set provides, it is nearly next to useless due to the crossbow's relatively low accuracy and damage against demons compared to other high-level weapons. In addition, the armour is classified as ranged equipment, causing accuracy problems when using melee or magic weapons against demons with moderate or high defence.

The complete set without crossbows can be stored in the armour case in a player-owned house.

The set's effects don't work against the following demons: