Demon Slayer was one of the first quests released in RuneScape. It focused on a cult's attempt to summon the demon Delrith and the efforts to thwart their attempt.

A mighty demon is being summoned to destroy the city of Varrock. You are the one destined to stop him (or at least try).

Players may start the quest by talking to Aris and handing her a coin to predict your future. She looks into her crystal ball and says, grimly, that she foresees you fighting Delrith, a demon that was originally summoned and slain 150 years ago during the Fifth Age by Wally, a hero of legend.

The fortuneteller will reveal that a cult of dark wizards is currently attempting to summon Delrith again, and must be stopped. She directs you to Sir Prysin, the descendant of Wally, for more assistance with defeating Delrith.

Before leaving, ask the fortuneteller how Wally defeated Delrith, and you will be shown a cutscene of Wally killing the demon with a special sword, Silverlight and chanting an incantation to hold him back in its dimension.

Be sure to take note of the incantation because it is needed later on in the quest and it varies among players. If you forget the incantation, you may simply talk to Aris again and she will remind you of it.

Head north to the palace and talk to Sir Prysin, located in the south-western room on the ground floor. Tell him that the Gypsy sent you for information regarding the sword, Silverlight.

Prysin tells you that the King ordered him to lock up the sword, away from prying eyes, due to its immense power. Thus he has placed the sword in the nearby case, whose 3 keys are given to as many people, for safekeeping.

He has given two of the three keys to Captain Rovin and Wizard Traiborn, and has somehow managed to misplace his own. You now need to retrieve all of them to obtain Silverlight.

One of the keys may be obtained by speaking to Captain Rovin, who is found on the 2nd floor[UK]3rd floor[US] of the palace. From the room Sir Prysin is in, walk north until you reach the north-west staircase, climbing up two stories to reach Captain Rovin.

Tell him that you need the key in order to recover Silverlight, as a demon is going to invade the city, and that Sir Prysin mentioned that he would give the key to you. After some arguing, he will reluctantly give you the key, berating Sir Prysin on his clumsiness.

The second key is in the underground below Varrock

The second key is stuck in a drain behind the kitchen in the north-east part of the castle. To retrieve the key, you will need to wash the key into the sewers and then collect it from there.

Use a bucket or a jug on any water source and use it on the drain. If you did not bring a bucket with you, there is a bucket spawn upstairs from the kitchen. After dislodging the key from the drain, head outside of the castle to the Varrock Sewers.

The entrance to the sewers is located south-east of the castle, on the outer side of the wall which has ivy growing on it and a tree farming patch nearby. Enter the sewers through the manhole and head north, through the left corridor, until your path is blocked off by a stream.

The key will not appear on the minimap, but it can be found in the south-west corner beside the skeletons, underneath a pile of mud.

Traiborn performing the ritual to summon his cupboard

Gather 25 sets of regular, unnoted bones. You can buy them on the Grand Exchange or kill almost any monster to obtain them. Head to the Wizards' Tower, located south of Draynor Village.

On the 1st floor[UK]2nd floor[US] of the tower, talk to Wizard Traiborn about the key, and he will ask for 25 bones to perform a spell which retrieves it from its storage place. Give them to him and after performing the ritual, he will hand you the third key.

Return to Varrock Castle and give the three keys to Sir Prysin. He will give you the Silverlight. 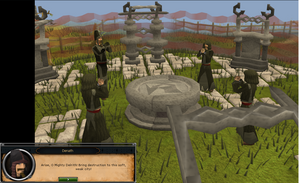 Now that you have Silverlight and the incantation, it's time to fight Delrith. Head to the bank and withdraw any food, potions and armour you might wish to bring for the battle. Head to the stone circle, immediately south-east of Varrock's lodestone, where the Dark Wizards are located – make sure you are wielding Silverlight. 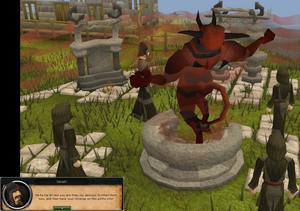 A short cutscene will play in which three dark wizards and Denath will summon Delrith, a tall, red-and-black striped demon. The wizards notice you, and Denath secretly leaves the circle.

As soon as the cutscene ends, one of the dark wizards will attack you, regardless of your combat level. Kill the wizard and move onto Delrith as quickly as possible.

Tip: If you are low on LP, exit the fight, enter the first house on the right in south Varrock, and go through the door inside; there is a patch of cabbages. If you do die, you can go back to Sir Prysin and he will hand Silverlight over, "just this once", for free.

Once you defeat Delrith, he will collapse onto the ground. Click to "Banish" him, and an incantation prompt will appear. Choose the incantation that Gypsy Aris gave you, and the demon will be banished from this dimension. If you choose the wrong incantation, Delrith will be revived and the fight will resume until you defeat him again.

After chanting the correct incantation, Delrith will be banished and the player will do a victory cheer by raising Silverlight. 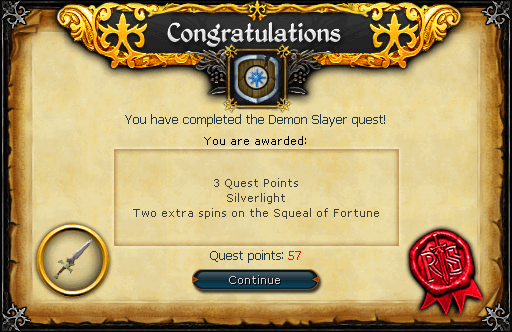 Wally defeats Delrith
The music that plays during the first cutscene

Delrith returns!
The music that plays during the second cutscene

This information has been compiled as part of the update history project. Some updates may not be included - see here for how to help out!
Retrieved from ‘https://runescape.wiki/w/Demon_Slayer_(historical)?oldid=35680086’
Categories:
Hidden categories: