Demon Slayer is a quest in which the player has to stop a cult of Zamorakian wizards who are trying to summon the powerful demon Delrith.

A mighty demon is being summoned to destroy the city of Varrock. You are the one destined to stop him (or at least try).

Start by talking to Gideon Bede in the Saradominist church north of the Varrock Museum. He gravely tells you that a follower of Zamorak, Denath, has stolen an ancient Tome of Demonology from the Edgeville Monastery. This book was used generations ago to summon a powerful demon named Delrith.

While Gideon is tracking Denath to prevent him from performing the ritual, he asks you to retrieve the lone sword capable of killing Delrith – the Silverlight – as a backup plan. The sword rests in the crypt directly below the church, watched over by its previous owners. 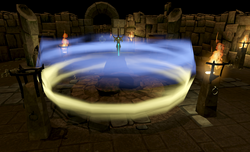 The Altar of Silverlight.

After talking to Gideon, climb down the trapdoor in the same room, directly south of him. Walk a bit north and you will see three spirits, each linked to an attribute: the Spirit of the Mind, the Spirit of the Body, and the Spirit of Faith. Speak to any one of them about Silverlight, and they will tell you you have to pass three tests to prove yourself worthy of the sword.

The following can be done in any order.

The Spirit of the Mind in the eastern room wants to test your focus on the job at hand. You must thus answer a series of simple questions pertaining to the quest.

Content with your answers, the spirit goes back to the altar in the central room. 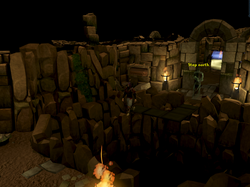 The spirit directs you on the invisible path.

In the northern room, you must walk along an invisible path guided by the spirit. Sections of the path will become visible as you walk over them. When doing this trial, you must only take one step at a time, waiting for the spirit to tell you which direction to walk. If you step off the path, you fall into the chasm and appear to die, however, you don't. You respawn at the start of the trial.

Once you're on the first part of the path, the order is:

When you reach to the other side of the chasm, walk back over to the central room, taking any path you wish.

Enter the west cavern and speak with the spirit of the Body, who wants to test your physical ability to wield the Silverlight. He asks you to kill the 10 skeletons piled up beside him. As the skeletons attack simultaneously using ranged, with a maximum hit of 1, pillars can be used to decrease the amount of damage taken by hiding.

Once you defeat all the monsters, the spirit will teleport back to the altar in the main room, pleased with the result. 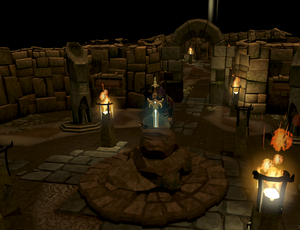 After successfully passing the tests, talk to the spirits again. They will congratulate you and break down the barrier to grant you access to Silverlight; you can now finally claim the sword from the altar.

Head up the ladder and you will find a scroll from Gideon to the north of the ladder, which tells you that he has managed to locate Denath. The wizard is currently in the Temple in south-east Varrock, directly south of Aubury's rune shop. Make your way to the Temple and climb down the trap door just outside the entrance. You will meet Gideon inside.

When you climb down the ladder to the Temple, if you have lost or destroyed Silverlight, or mounted it in your Quest Hall, Gideon will give you another. 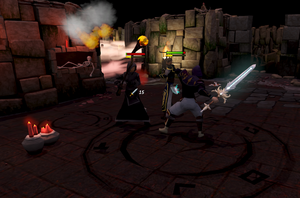 Fighting Denath's minions on your trip through the catacombs.

You must now fight your way past some cultists. You must kill all of them in a room before the magical barrier to the next will disappear. If you stand close enough, Gideon will attack them, and you will get the experience for the ones he kills. 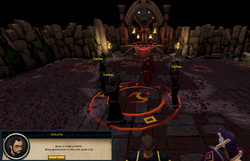 While passing the final barrier, a cutscene plays where you confront Denath and a group of his cultists, with the demonology book placed on a strange Zamorakian symbol. Do not click anywhere else during this scene, or it would have to start again. He taunts Gideon for not being able to stop him, before completing the ritual and teleporting away, leaving his cultists behind. Delrith appears at the spot of the now-burned book, ready to spread chaos over the city. He attempts to attack you with a powerful blast, but due to Gideon shielding you, it only succeeds in killing the cultists. 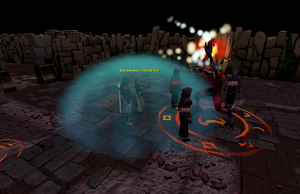 You must now defeat Delrith using Silverlight or Darklight: no other weapon will work against him, excluding off-hand weapons, which work as long as silverlight or darklight is equipped in the mainhand slot. Every time it loses 250 life points, it shouts "Prepare to be incinerated!" and launches a magical attack; Gideon will then create a protective shield around him and tell you to come underneath the shield. If you do not do so, Delrith's attack will reduce your life points to 1, otherwise you will be hit by 20% of your current life points and Gideon will teleport somewhere else in the room. If you are wearing certain Saradomin items, royal dragonhide armour or full Armadyl armour, you cannot hit Delrith. 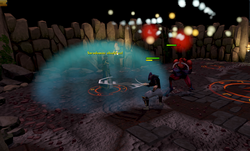 If you run low on health during the fight and have no food, you may restore it by leaving and re-entering the arena. If you die and lose Silverlight while fighting Delrith, you may reclaim it from Gideon Bede in the catacombs.

After killing Delrith, the room will start to collapse, and Gideon will teleport you both back to the Saradomin church. Speak to him one final time to finish the quest. 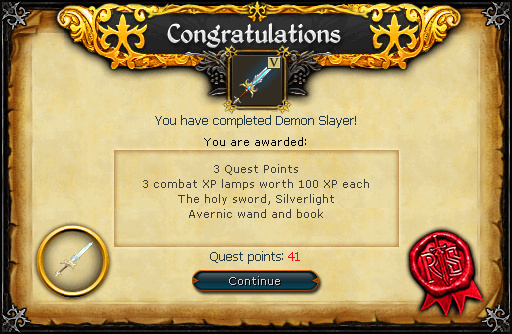 Demon Slayer is directly required for the following quests/miniquests: