From the RuneScape Wiki, the wiki for all things RuneScape
(Redirected from Deflect curses)
Jump to: navigation, search
"Deflect" redirects here. For the threshold Defence ability, see Reflect. 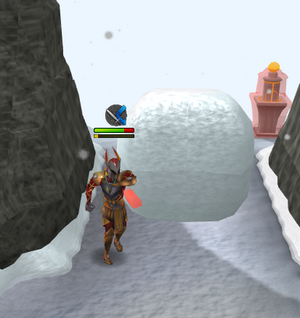 Deflect Curses are Prayers from the Ancient Curses prayer book. They are popularly used due to having the same drain rate as their respective protection prayers and the chance to deflect damage back at the enemy, commonly known as "pray melee, range, and mage". Players need to have completed The Temple at Senntisten quest to access these prayers. Once players have completed the quest, they can switch to the Ancient Curses prayer book by praying at the Altar of Zaros in the Zarosian temple beneath the Varrock Dig Site or the Elven grimoire in the Cadarn district in Prifddinas.

Some high levelled monsters and bosses (eg. Nomad, Bork, Jade vine) cannot be harmed by deflect curses and the player will get a message You are unable to reflect damage back to this creature.

Deflect curses stop 50% of damage in PvM and 40% of damage caused by other players (in PvP). In addition, they also have a chance of deflecting some of the damage they would have caused back onto the attacker. As with 'Protect from' prayers, players can only deflect one style of combat at a time (Melee, Ranged, or Magic). Creatures that can only be damaged in a specific way (ex. Vyrewatch can only be damaged by the Ivandis flail or Blisterwood weapons) cannot be hurt using a deflect curse.

While activated, the Curses have a deflect rate of approximately 60%. This means that on slightly more than half of the hits, the player will wave their arm in a blocking gesture, accompanied by a light (Red-Melee, Blue-Magic, Green-Ranged), showing that the deflect occurred. When this happens, 10% of the blocked damage will be deflected back, and if it would have hit a zero or under ten, there will be no recoil. However, recoils become helpful when fighting a boss because they deal higher damage than normal monsters.

Protection prayers and curses give 50% damage reduction in most scenarios. However, there are a number of exceptions that are outlined in the chart below.

This information has been compiled as part of the update history project. Some updates may not be included - see here for how to help out!
Retrieved from ‘https://runescape.wiki/w/Deflect_Curses?oldid=35534183’
Categories:
Hidden categories: