From the RuneScape Wiki, the wiki for all things RuneScape
Jump to navigation Jump to search
The Old School RuneScape Wiki also has an article on: osrsw:Defiler
For "Elite" version, see Elite defiler. 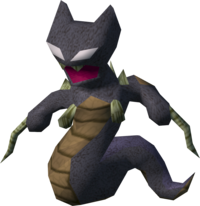 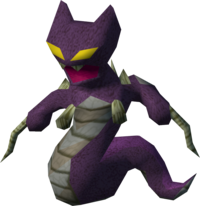 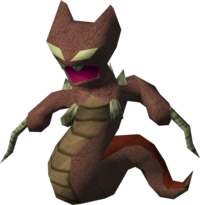 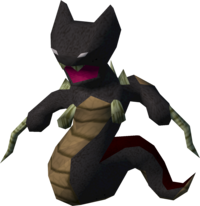 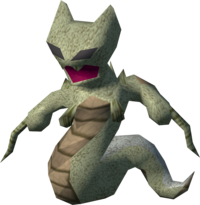 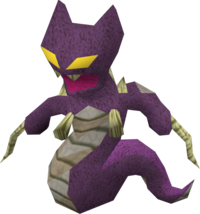 Defilers are fast, agile creatures in the Pest Control minigame. They have the appearance of the lower half of a snake, a humanoid top half and a face resembling that of a cat. They can throw flying spikes over long distances, can inflict a large amount of Range type damage with the missiles, and will actively attack the Void Knight. They can even launch their barbs over walls, though if they are in the spaces right in front of one of the three gates, they cannot shoot over it, so keeping them closed will block those directly in front of it. Even though they have no apparent link with imps, they make the same sound as imps when being attacked and when attacking.

The Defilers makes two appearances during the quest; The first, one of them appears as a non-attackable monster among an ambush of pests in the second room of the Black Knight basement along with a Spinner, a Brawler and a Torcher. The second appearance is in the final battle with the Pest queen, where an elite squadron of defilers attempt to kill off the Rangers aiding in the battle.

This information has been compiled as part of the update history project. Some updates may not be included - see here for how to help out!
Retrieved from ‘https://runescape.wiki/w/Defiler?oldid=35643466’
Categories:
Hidden categories: