Defender of Varrock is a quest featuring the return of a Mahjarrat, Zemouregal, to invade Varrock with the help of an undead Arrav.

Troubling reports are arriving from scouts in the Wilderness: zombies are amassing and organising. Zombies alone are incapable of such intelligent behaviour, and each time it has happened in the past great tragedies have come to pass. Captain Rovin, suitably concerned, needs your help to go on a dangerous mission to verify the reports.

Are the Varrock Guard just being paranoid, or could this be a major threat to their city?

Reading the Legend of Arrav in the Lores and Histories section of the website will give you a better appreciation of the storyline of this quest.

The warning beacons are in use during this quest, and thus you will be unable to play All Fired Up for a major portion of the quest.

During the quest you can sometimes get the message: "You're going the wrong way for the mission, so Hartwin has left. Speak to Rovin when you need Hartwin again. Your follower has left.". It is possible to continue with the quest, so you don't need to go back to Varrock Palace.

Head to Varrock Palace, and make your way to the 2nd floor[UK]3rd floor[US] of the northwest tower. Talk to Captain Rovin in his room. If he tells you to explore somewhere else, then it means you do not meet the requirements to start the quest. Ensure you have claimed kudos in Varrock Museum from Historian Minas.

He tells you that zombies have been seen organising in the Wilderness. He calls for his scout Hartwin, who reports a "shadowy figure" and an army of zombies in the Graveyard of Shadows. Rovin asks you and Hartwin to investigate further.

Before moving on, make sure that you don't have a familiar summoned, otherwise Hartwin will not follow you outside. Also, if you lose Hartwin for any reason, he can be found back at the Varrock Palace. If you log out whilst Hartwin is following you, when you log back in, you will be in Varrock Palace. Just talk to Hartwin again to be teleported back to the graveyard. 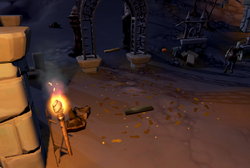 The zombie footprints on the ground.

After speaking with Rovin and Hartwin, Hartwin teleports you both to the Graveyard of Shadows; for the duration of the quest, this area is not a part of the Wilderness and therefore you are safe from the threats present there. Enter the graveyard and talk to Hartwin. A cutscene ensues, showing a trail of zombie tracks leading away from the graveyard. After the cutscene, you and Hartwin are standing near some footprints.

Similar to how you track when hunting, use your Hunter skills to follow the zombie footsteps. Adjusting the display mode to "Safe Mode" will make the tracks significantly easier to see. 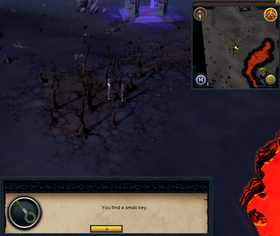 Approximate location of the grubby key.

51 Hunter is only required to uncover the first set of tracks. Inspect nearby bushes, trees, tree stumps, mushrooms, and bones to uncover the tracks. You may encounter several dead ends and places where the trail seem to go in circles. Mind the zombies who attack you near the graveyard.

Eventually, you uncover a grubby key along the tracks, in a thicket of trees. Continue tracking until the footprints end at the entrance to the Chaos Temple and you receive the message: "The trail seems to stop as it reaches rockier ground. Hopefully you can find out what happened to the zombies in this area.". Speak to Simon who's walking around nearby carrying a large sack on his back and ask about the army of zombies. He'll tell you they walked into the nearby altar and didn't come back out.

(This section of the quest is currently bugged - when going down the trap door after having spoken to Hartwin next to it, he will often leave back to Varrock, saying you have gone off path. Ignore this entirely. Follow on with the quest guide and you'll progress normally)
See the Temple dungeon page for a map and description of the dungeon. 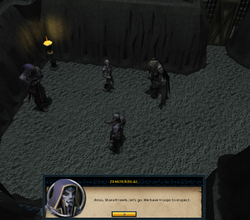 Use the grubby key on the trapdoor just south of the altar in the Chaos Temple, and enter the tunnels under the temple. Armoured zombies attack as soon as you climb down the ladder. Run north to get out of range, and look for a balcony to the east that overlooks a chamber. Choose the "Look-over Balcony" option. 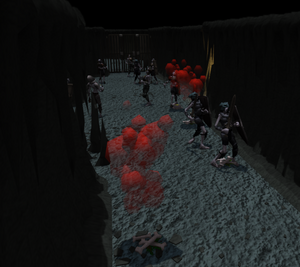 Killing the zombies to get red mist.

In a cutscene, Sharathteerk and Zemouregal talk about allying with Lucien. Zemouregal rejects the idea because he has "significantly powerful resources" of his own: an undead Arrav, who will take command of Zemouregal's zombie troops!

You now need bottles of red mist to pass through the next few doors, as they behave like keys. Only three are required; the contents of the extra bottles will leak out before you can use them.

Head west through the dungeon corridor, and pick up three bottles on the ground around the armoured zombies. Attack three armoured zombies, and when a zombie dies, store the red mist that appears by using a bottle on it. With the filled bottles, go through the first door to the west; you see another cutscene: Arrav is in the room and reveals that while his zombie body is under the control of Zemouregal, his mind is free. He starts to tell of how someone could be able to help him, when he is summoned away by his master.

The zombie army, ready for battle.

Head north up the corridor, kill three zombies to refill your bottles with red mist, and then go east and open the second door. The bottles won't be required further and can be dropped. Follow the corridor east to another balcony to the south, and choose the "Look-over Balcony" option again to view another cutscene.

You see below that Zemouregal has raised an army of armoured zombies. Zemouregal says this may be his last real chance to attack Varrock and claim the Shield of Arrav before the time comes to head north. Realising the gravity of the situation, return to Captain Rovin and tell him what you and Hartwin learned about the zombie army. Note: Make sure to complete the cutscene before you leave the dungeon or you will have to return to re-view it. 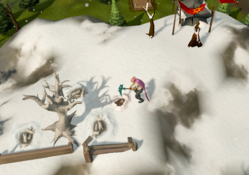 Unearthing the entrance to Camdozaal.

Rovin asks you to speak with Thurgo, one of the surviving Imcando dwarves, to learn how to use the Shield of Arrav to defend Varrock. Travel to Thurgo's Peninsula, north of Mudskipper Point, either by teleporting to Port Sarim using the Lodestone Network or by using the fairy ring code AIQ.

Talk to Thurgo about the Shield of Arrav and he'll suggest you find the great lost dwarven hall of Camdozaal, and The Sacred Forge within. He gives you a scrap of paper with the coordinates for Camdozaal on it.

If you do not have a blurite ore yet, head down into the Asgarnian Ice Dungeon under the hill east of Thurgo's hut and mine one blurite ore from the ice-covered rocks there.

experience if you give the pie to Ramarno)

The location of the coordinates on Ice Mountain.

Make your way to the Ice Mountain, north of Falador and west of the Edgeville Monastery. Once on the mountain, dig with your spade (tool belt does not work) on the location (10 degrees, 31 minutes north; 17 degrees, 48 minutes east), just northeast of the white tree. ***With introduction of Archaeology Skill dig at 10 degrees, 30 minutes north; 17 degrees, 48 minutes east to proceed as the location given on scrap of paper is now blocked by a material cache***

If you dig in the correct location, you'll receive a message - "You dig a hole in the snow. Under the snow, you find there is a lot of rubble." Continue to dig using the spade until you get the message "You'll need something better than a spade to get through the rubble."

Next, mine out the churned-up snow; you get the message, "You swing your pick at the rubble. You clear the rubble, revealing a hole in the ground." With a light source in your inventory, enter the hole.

Ramarno chanting to the Sacred Forge.

Down in the ruins of Camdozaal, talk to the blind dwarf, Ramarno. He tells you more about himself and explains how to use The Sacred Forge.

Use the blurite ore on The Sacred Forge, and then talk again to Ramarno. You see a dreamlike cutscene: images of 4 random characters from previous quests appear and show you how to tap the power of the Shield of Arrav. The possible appearing characters include Traiborn, King Roald, Queen Ellamaria, Sir Prysin, Reldo, Lord Rologarth, and the Wise Old Man. Zemouregal then senses your presence and his image appears, taunting you that you are too late, as his army is already at the walls of Varrock.

The invasion of Varrock!

Quickly return to Varrock and head to the palace. Upon entering the palace grounds, you see yet another cutscene: armoured zombies are inside the palace and overrunning the guards. Avoid engaging the zombies, and run to the 2nd floor[UK]3rd floor[US] of the northwest tower, and talk to Captain Rovin. Tell Rovin what you learned at The Sacred Forge. He tells you to check the library records and gives you the Shield of Arrav.

Climb down the stairs, go into the library, and talk to Reldo. He tells you about the old census and an old document that a zombie knocked to the floor. Against the north wall of the library, look for an open book on a lectern: this is the Varrock Census from the Year 160, Fifth Age. Read the census to find the names and occupations of the citizens of Varrock for the year 160.

Search the scrolls on the floor near the tipped-over desk to obtain the list of elders. You must read the list of elders to continue past this point. Some names listed in the census match the seven names of the city's first elders written on the scrolls, thus making them the descendants of the first elders. You must now talk to these scions with the Shield of Arrav in your inventory. The descendants are:

Each of them will wield the Shield of Arrav, but none will be able to activate its magical properties. One of them, however, will tell you that they are not a blood descendant, and is the progeny of the Fitzharmon kin that was adopted into the family; the person who reveals this is random for every player. 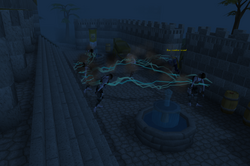 Dimintheis unleashing the power of the Shield of Arrav on the armoured zombies.

As soon as you learn about the Fitzharmon family, talk to Dimintheis Fitzharmon, who is in the northern-most house of the gated-off area south of Varrock's east bank, where Family Crest was started. Dimintheis wields the shield, and it responds to him.

He is revealed to be a descendant of the founder of Varrock. In the cutscene that follows, Dimintheis uses the shield to kill the zombies throughout Varrock Palace. With the invasion of Varrock gone wrong, Zemouregal flees the scene with Sharathteerk and Arrav. After the cutscene, you find yourself next to Captain Rovin; talk to Rovin to end the quest and receive your rewards. 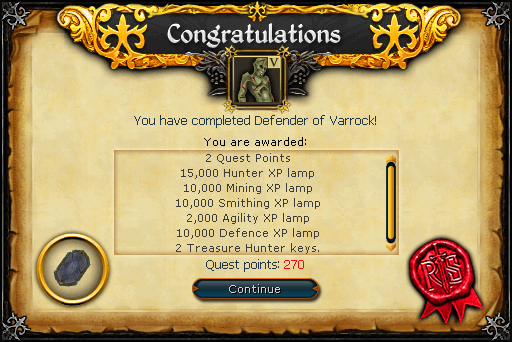 Defender of Varrock is directly required for the following quests/miniquests: