From the RuneScape Wiki, the wiki for all things RuneScape
Jump to navigation Jump to search
This article is about a Hunter skilling node in the main front area. For a variant found in Croesus encounter, see Dead Varrock guard (Croesus, Hunter).
Decaying Varrock guard? (edit)? (edit) 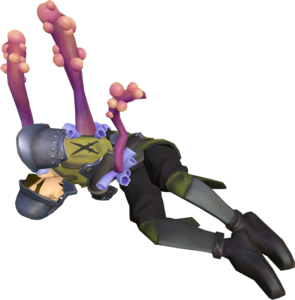 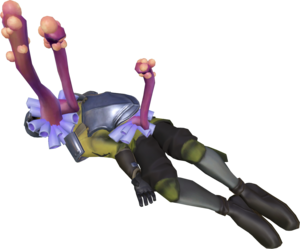 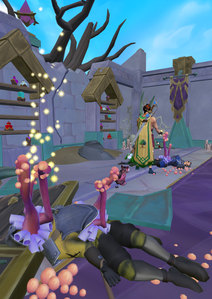 Decaying Varrock guards are members of the Varrock Guard killed by Croesus and infested with fungal spores, which can be gathered from them with level 88 Hunter for regular version and level 92 for enriched fungal spores. They can occasionally turn into enriched version, which lasts for 90 seconds, or temporarily deplete. They are found inside a building in the south-eastern part of the Croesus Front. They are functionally the same as decaying Lumbridge guards. The version found in the Croesus encounter has no requirements but gives much less experience.

Over 575,000 experience can be gained per hour at level 99 hunter gathering spores via this method.

Having a magic butterfly net equipped and unsheathed increases the odds of gathering by about 7.8%, however it decreases the experience granted per fungi:

This information has been compiled as part of the update history project. Some updates may not be included - see here for how to help out!
Retrieved from ‘https://runescape.wiki/w/Decaying_Varrock_guard?oldid=35979536’
Categories:
Hidden categories: