Death to the Dorgeshuun

Death to the Dorgeshuun is the second quest in the Dorgeshuun quest series and sees the return of Sigmund, who attempts to destroy the Dorgeshuun with a less subtle plot than last time. It also sees the first appearance of Zanik, the series' main protagonist.

What's with the cabal?[edit | edit source]

Go to the Lumbridge Castle basement, using the trapdoor in the kitchen. Take a light source, like a lantern, and enter the cave to the rear of the basement. Walk to the first intersection inside the dungeon and talk to Kazgar, who will show you through the caves to the mine.

Next, talk to Mistag, who fears that the H.A.M. leaders are plotting an attack on them. To check the threat, the Dorgeshuun clan plans to send an agent to their headquarters. As the Dorgeshuun have never seen the RuneScape surface before, Mistag requests you to guide their agent and give her a tour of Lumbridge. He finally tells you to obtain a pair of disguises so that you can blend amongst the H.A.M. people.

Get 2 sets of H.A.M. robes any way you can (You can purchase them on the Grand Exchange or pickpocket them from H.A.M. Members). This means the entire set - (shirt, robe, hood, cloak, logo, boots and gloves). Once you have these, return to the Lumbridge castle cellar and talk to Zanik. Dismiss any followers you have before speaking to Zanik, otherwise she will say your pet will get in the way.

If you lose Zanik at any time, by teleporting or by any other means, she will go back to the Lumbridge Castle cellar. 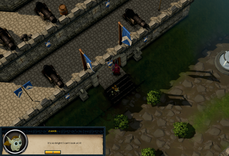 Zanik being blinded by the sun

After talking to Zanik, she will take one set of robes off you, and ask you to show her around Lumbridge. She tends to get stuck behind walls and doors, but if you get too far away from each other, she will teleport directly to you so it won't be a problem. You can talk to her and ask if she has seen enough to know where you need to take her.

There is a bug where if you run outside the castle too quickly it will skip critical dialogue, and each time you speak to Zanik you will be asked to take her outside of the castle regardless of location. To avoid this go back in and step just outside the castle doors, on the very block outside, this will initiate a skippable cut-scene, go through the dialogue to continue with the quest.

As soon as you initiate conversation, she will teleport to a nearby square. The following steps can be done in any order; however, these are put in order to make it faster: 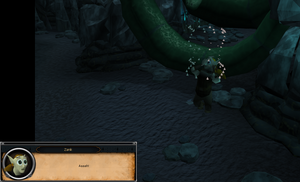 After you have spoken to the required people, you may ask Zanik about the mark on her forehead. If she doesn't talk, teleport away and come back to her in the basement. She tells you about the origin of the 'mark' - she received it whilst collecting the Tears of Guthix, and that she is destined to do something great.

If you have a low combat level, the H.A.M guards will be aggressive towards you; a good location to speak with a H.A.M member is in the north-east or south-west region of the dungeon.

Once you are at the headquarters' entrance, you need to pick a lock on the trapdoor that leads to the dungeon. Climb down the ladder and talk to a regular H.A.M. member or guard. They will tell you that the leaders, Sigmund and Johanhus, are planning something big in order to get rid of the Dorgeshuun, but they won't reveal the details to any regular members.

One of the H.A.M. leaders, Johanhus Ulsbrecht, can be found in the southern room. Talk to him about the cave goblins, but as the member informed you, Johanhus doesn't want to share his ideas with you. Wander around to the south of the main H.A.M. room, where Zanik will spot a trapdoor.

Right-click on the dirt tile, "pick-lock" the trapdoor — you need 23 Thieving — and go down. You will now be in a storeroom.

In the following section, if any of the guards catch you, you will be sent to jail, which is located on the floor above. Do not worry though; Zanik will pick-lock the door to the jail, but you will have to kill the guards with Zanik all over again. 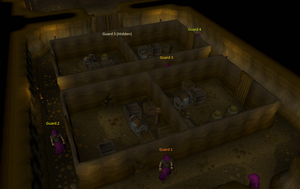 You and Zanik eavesdropping in on the H.A.M. leaders' conversation

Finally, when all the guards have been laid to rest, listen at the door. A few people are clearly having a conversation inside the large hall, although it is inaudible for your ears. Zanik, however, has sharp hearing skills and she informs you that they are talking about some machine being planned to use for evil.

As Zanik tries to further explain, a senior guard catches both of you and throws you into jail. 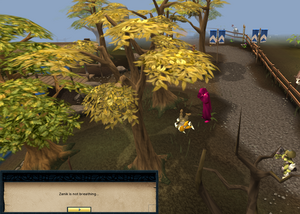 When you wake up, you find that Zanik has not suffered the same fate as yours. Talk to Jimmy the Chisel, who says that Sigmund had taken Zanik outside. Right-click on the jail door and "pick-lock" it to escape. If you forget to talk to Jimmy, simply talk to one of the members and exit the H.A.M. hideout.

Leave the H.A.M. hideout and you'll find Zanik near the entrance. You notice that although she isn't breathing, the strange mark on her forehead is glowing. Pick up her body.

While Zanik is dead, and in your inventory, home teleports can be made without her returning to the Lumbridge Castle Cellar. If you've completed Tears of Guthix, you can use a games necklace to teleport directly to the Tears of Guthix cavern. Alternatively, if you have unblocked the opening from the Lumbridge Castle cellar to the Lumbridge Swamp Caves, you can enter as you would if you were going to the Dorgeshuun mines, but instead of going through the tunnels, head through that opening to the south and onwards to the Tears of Guthix cavern. If you have not opened it, you will need a pickaxe to create a passageway. 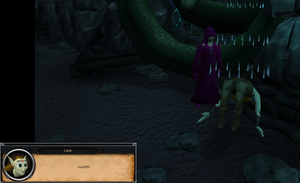 After reaching the Tears of Guthix location, talk to Juna. She will ask you to collect 20 tears, which can restore Zanik to life. (This does not count towards your weekly Tears of Guthix progress, and it gives you no experience) A cutscene will follow after you collect the tears, where Zanik will explain what she had heard in the H.A.M. meeting room.

Johannus, Sigmund, the H.A.M. Deacon and a senior guard were talking about building a drilling machine, with the help from the H.A.M. dwarves at the Lumbridge water wheel, causing the swamp caves to flood with water from the River Lum.

To be continued...[edit | edit source] 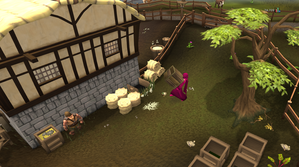 Machinery gathered at the mill

After the cutscene, home teleport to Lumbridge and head to the Lumbridge Castle basement using the trapdoor in the kitchen to get Zanik to follow you again and then make your way to the Lumbridge Watermill. Go across the bridge to the east bank of River Lum and travel north until you find a cow pasture on one side of the road and a farm with Chickens on the other.

Once you reach the farm, you see a trapdoor leading from the south side of the watermill. You must be wearing the full H.A.M. outfit for this to work - talk to the dwarf guarding the trapdoor and say you're there to help.

Unequip your main-hand and off-hand weapons and shields, and speak to Zanik. Search an empty crate south of the dwarf, and Zanik suggests hiding herself in one of them whilst you carry it into the dungeon. Pick her up and go down the ladder. You can remove the H.A.M. robes and wear your armour now. 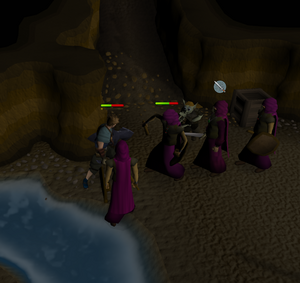 The fight with Sigmund

Critical: Go west and walk up to Sigmund, instead of immediately clicking to attack him. You must trigger the dialogue with Sigmund in order to have Zanik attack him, which is needed to complete the quest. With Cinderbane gloves, you are able to poison Sigmund without needing to use dialogue. He will die without ever switching to protect from ranged. Immediately following this scenario follow the step as if you killed Sigmund the regular way.

Sigmund, who is level 42, will appear, along with three level 36 guards. Sigmund will use a protection prayer based on the attack you are using, so focus on his henchmen first. Note that like for all NPCs, Sigmund's prayers do not run out and give him 100% protection. After Sigmund's guards are dead, Zanik will range him. He will switch to protect from ranged. Attack him with melee or magic. At 10 life points, he will escape with a ring of life, but curses you and promises to strike back at your goblin friend. Should you die or leave the area while fighting, Zanik will remain there, waiting for you to return. However, all three guards will have re-spawned and Sigmund will have regained his health.

After clearing the area, smash the drilling machine to foil their plans. Go down the southern tunnel and exit there, and you'll find yourself back with the Dorgeshuun leaders, discussing whether the city should be opened for the "surface-dwellers". After hearing Zanik's account, they welcome you into their city, Dorgesh-Kaan. 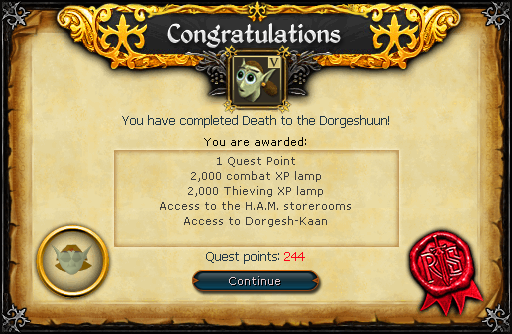 Death to the Dorgeshuun is directly required for the following quests/miniquests: