The Death Plateau is an elevated plane located in the southern Troll Country. The Trolls have taken up camp on the plateau, using it to launch raids at night on the nearby village of Burthorpe. In the Death Plateau quest the player is asked by Denulth, head of the Burthorpe Imperial Guard, to find another way up to the plateau, as the main path is heavily guarded. Several Thrower trolls watch the pass and attack any trespassers.

In the Death Plateau quest, a safe passage into the troll lands is found within Sabbot's cave, which is basically an agility dungeon. 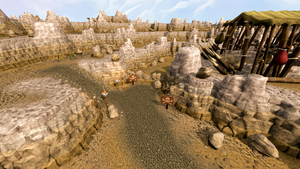 The path leading to the Plateau. Beware of trolls!

To reach the plateau itself (where the trolls are located), follow the main path up the plateau. Due to a large amount of Thrower trolls guarding this route it is recommended to use Protect from Missiles. Alternatively, if you do not have access to this prayer, you can use a Fremennik Round Shield to lower damage to about 10-20 life points.

There is a very large number of Trolls on the Plateau, these include; Thrower Trolls, Mountain Trolls, and several higher ranking trolls; Rock, Stick, Pee Hat, and Kraka.

At the centre of the Plateau lies a gigantic Cooking pot where many unlucky adventurers and soldiers have met their ends. The Cooking pot is maintained by Ash and Dung, two troll cooks who often argue about the best methods of cooking humans for lunch.

This location is also visited during My Arm's Big Adventure, when the player has to search the cooking pot for a Goutweedy lump after a previous adventurer was cooked there.

Players who received a troll Slayer task often come here with a cannon, as it guarantees quick experience while being able to hide behind the tents there.

Including the other non-icy parts of the Troll Country, this place was updated on 15 March 2011.

The plateau plays a part in the following quests: