From the RuneScape Wiki, the wiki for all things RuneScape
Jump to navigation Jump to search
For other uses, see Death lotus (disambiguation). 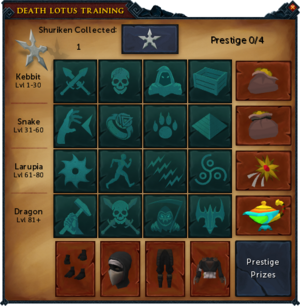 Death Lotus Training is a Treasure Hunter promotion from 13 August to 19 August 2015. During this event players can complete various challenges and tasks which can be checked using the Death Lotus training scroll, automatically given to each member who plays Treasure Hunter during the promotion. This does not include any Ironman accounts. The scroll can be completed multiple times for different rewards.

Tasks may be skipped through the use of shuriken stamps, which can be won from Treasure Hunter, or received from a Ninja Master.

Rewards from completing columns of the scroll include:

Completing the training scroll multiple times awards red, black and blue belt cosmetic variants of the outfit, as well as: