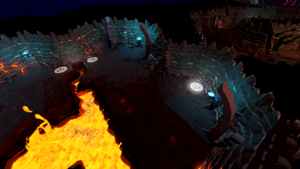 As far as training in free-to-play areas is concerned, a free player who is not concerned with raising Prayer through monster drops and has at least 40 Fishing and Cooking would do well to train melee in the Karamja Dungeon due west of the Karamja volcano entrance. This particular training spot is almost never crowded, and there is relatively close fishing spot to catch lobsters at Musa Point, located on the northern end of the island's surface. Players may obtain logs from the tree near the end of the docks or via dead trees on the volcano to make fires and subsequently cook the fish they catch. These possibilities mean a self-sufficient player could potentially remain on Karamja and train on the spiders indefinitely.

Drop rates estimated based on 2,896 kills from the Drop Log Project, unless otherwise cited.