From the RuneScape Wiki, the wiki for all things RuneScape
Jump to navigation Jump to search
For other uses, see Deadliest Catch (disambiguation).

Deadliest Catch is a master quest first announced in the Guaranteed Content Poll: What’s My Name? which allowed players to vote on a name for the massive fish, Thalassus, featured in the quest.

Thalassus has been terrorising the cold and inhospitable oceans to the north. No one has survived to sketch a picture of this hulking beast, but the inns are full of rumours: Thalassus is the size of the Wizards’ Tower, they say; sailors are eaten and digested while still alive in its belly.

Fisherman Jones wants to end the scary stories by landing the beast and gaining a little glory in the process.

Jones, a seasoned fisherman, seeks to obtain glory by capturing Thalassus, a legendary sea monster. He is found outside of the bank in the Fishing Guild. Jones is hoping to find an experienced fisherman willing to aid him. After speaking with Jones, he will reveal that he needs your help to enlist a rower, obtain a sea chart of the area, and forge a giant harpoon that is capable of bringing Thalassus down. He will give you some harpoon plans.

After successfully pickpocketing the master fisher, speak to him about finding a master smith. He mentions that Linza, a nearby smith who is working on a few projects for local fisherman, might be able to help. Be sure to speak to the Master Fisherman before searching for Linza, or she won't show up!

Linza may be found in the small town of Hemenster, located north and slightly east of the Fishing Guild. Speak to her about making a harpoon, and her interest will be piqued when you mention Thalassus. She will reminisce on her experiences with hunting cryptid creatures, namely the Crackjaw, and then agree to make a giant harpoon for you in return for one Thalassus's teeth. She then hands you the Giant Harpoon. Return to Jones with the harpoon and ask about an extra rower.

To recruit a rower for the endeavour, head to the Tower of Life, located southeast of Ardougne. Use of the Kandarin monastery teleport (earned by completing the easy Ardougne achievements) to teleport to the monastery south of Ardougne is recommended, or Fairy ring code DJP is very close by, just head a few steps west - alternatively you can use the lodestone network.

Speak to 'The Guns', Jones's cousin who may be found lifting a log just outside of the tower. He claims that he would be more than willing to assist with the endeavour, but his seasickness prevents him from travelling out to sea. However, he mentions that his cousin usually made him a sea legs potion whenever they went fishing.

Return to 'The Guns' and hand him the newly brewed potion. Satisfied, he will offer to return you back to the Fishing Guild to meet with Jones. 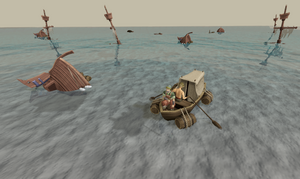 After returning to the Fishing Guild and speaking with Jones, he will take the party out to sea. The small vessel will arrive at the wreckage, and certain wrecks must be investigated to reveal parts of Thalassus's trail. This process is identical to the method of tracking various animals in Hunter. Instead of paw prints follow the trail of debris. Investigating the correct wreckage at the end of the debris will reveal a new debris trail.

The curiosity bar fills with each wrong investigation and 5 mistakes are allowed when investigating the trail. Should you investigate the wrong wreck 5 times, the trail will reset, but the correct solution will remain the same. In addition to the option to investigate the ship wrecks, various items may be looted from the wreckages.

After completing the trail to uncover Thalassus, the monster will surface, knock you and Jones overboard, and swallow Jones. After washing up onto the shore of a small island, three mermaids will mock the expedition and reveal their loyalty to Thalassus. The mermaids are rather confident and must be convinced that Jones, with his giant harpoon, poses a great danger to Thalassus now that he rests in the belly of the monster. 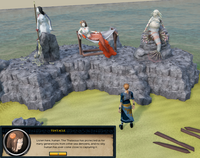 To diminish the confidence of the mermaids, the following dialogue options must be chosen:

Choosing a different option from the ones listed above will reset the mermaids' confidence and require you to start the dialogue over.

After instilling fear into the mermaids, they will insist on tracking Thalassus down once more in order to force Jones from the beast's bowels. Upon arriving on the boat, it is necessary to track the creature a second time. 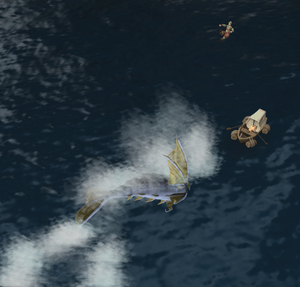 When tracking Thalassus the second time, the track uncovered is different from before, but the concept is identical. At the end of the trail, Thalassus will once again surface from the depths, and 'The Guns' will throw karambwan at the monster. Upon eating the karambwan, Thalassus will sick up and expel Jones back onto the boat. On instruction, 'The Guns' will make a break for land.

Note: There is a chance of looting an additional 3 items while hunting Thalassus for the second time.

Back at the Fishing Guild, Jones will reveal that he managed to snag a tooth from the beast. Head back to Hemenster and deliver the tooth to Linza. Return to the Fishing Guild one last time and talk to Jones. Quest complete. 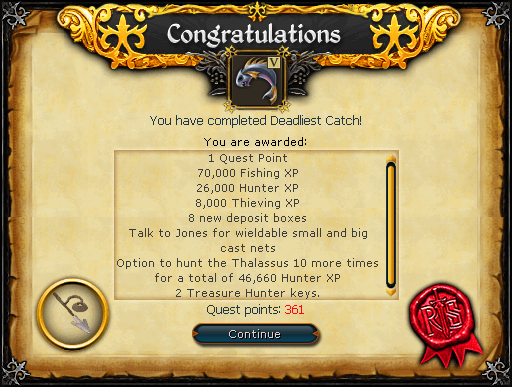 Deadliest Catch is directly required for the following quests/miniquests: