From the RuneScape Wiki, the wiki for all things RuneScape
Jump to navigation Jump to search
Not to be confused with Dead tree.
For the tree in Varrock, see Tree (protected).
Dead treeTree Stump? (edit)? (edit) 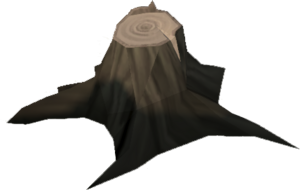 A dead tree can be found behind the south-eastern building in Yanille. It can be chopped down like any other dead tree, and can be used to get logs. Its only difference is its examine text, which is a reference to Mod Timbo, who added the tree back to its location after it was accidentally removed during a previous update. The removal caused an uproar on the RuneScape forums due to its relevancy in Treasure Trails, gaining the attention of the developer.

This tree requires level one Woodcutting to cut and give normal logs. When the tree is cut down, it turns into a Tree Stump, which is the same and normal stumps except for the examine text again.

The tree is next to a Treasure Trails map location.

This information has been compiled as part of the update history project. Some updates may not be included - see here for how to help out!
Retrieved from ‘https://runescape.wiki/w/Dead_tree_(Timbo)?oldid=35700911’
Categories:
Hidden categories: