An introduction from an unknown figure.

The Davendale Tutorial is a current tutorial being tested through an A/B test. The tutorial can only be started on mobile, but can be played on desktop thereafter.[1] It was introduced into the game on 22 February 2021, sharing its spotlight with the other current tutorial.

Start of an adventure[edit | edit source]

An unknown figure talks about adventurers.

Upon account creation, a small cutscene plays, narrated by an unknown figure. Once the cutscene finishes, the player is placed on Davendale's beach. Use the middle mouse button to turn the camera and make your way up the beach and into the forest. Further along the path, after stepping over a fallen Davendale sign, Mayor Druss Daven can be found, who will welcome you to Davendale. 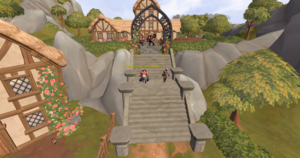 Upon arriving inside of Davendale, Druss shows you to his mansion, which after a short while, gets flooded by an invasion of trolls, which have seemingly entered through a big hole in the courtyard. Druss and the player panic and run into the village square. Druss then asks you to help the village out by engaging in combat with the trolls or by gathering food supplies. The player can freely choose to do either or both. A progress bar can be found in the top left of the user interface to keep track of how much help has been given.

Helping out the village[edit | edit source]

To the west of the square, the player can talk to Martin the fishmonger, who will give the player a fishing rod and teach them how to fish the nearby raw minnow or davios and subsequently cook them. Catching or cooking a raw minnow adds 1% of progress to the bar. Catching or cooking a raw davio will add 2% to the bar. Handing in either cooked fish to Martin will increase the bar by 5%. Burning any fish will not gain any percentage.

Heading all the way east of the square, Zafir Daven can be found on the stairs leading up to Druss' mansion. When spoken to, she gives the player The Spirit of Davendale sword which can be used to clear out Stove and his grunts from the mansion. If the player has no food, Zafir will give them 5 minnows to heal up with. In order to attack and kill Stove, the player must first get 2 Attack by killing the troll brutes and louts in front of him. Killing any troll will grant the player 8% towards the progress bar. If the player dies, they will respawn back in the town centre. Killing Stove will instantly fill the progress bar.

Chasing away the trolls[edit | edit source] 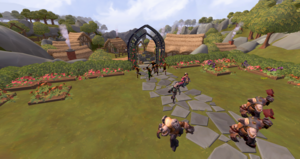 The townspeople chase away the trolls!

Once the progress bar has been filled, return to Druss, who will thank and praise the player and ask to help chase the trolls away, which will initiate a cutscene of the townspeople scaring away the trolls. Afterwards, speaking to Druss will open the character creation screen where the player can choose their appearance, name and play mode. Upon completion Druss will reward you The Spirit of Davendale sword, 50 coins, a tool belt and the ability to use the Home Teleport. 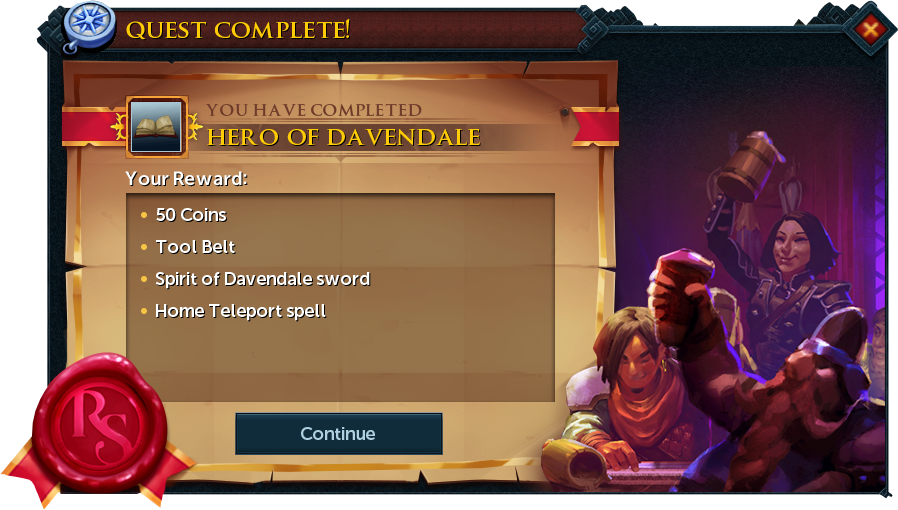