Davendale is a small village found along an unknown coast. It is inaccessible outside of the tutorial.

Inaccessible from the mainland, Davendale seemingly sits along a coast between a selection of hills. Upon arrival, the player walks from the scenic beach through some forests, over a fallen Davendale sign in order to access the village. Along the forest path, a small seating area can be found, with a broken bench that can be repaired and subsequently sat on. A sign nearby reads Vote for Druss Daven - Mayor of Davendale for 25 Years and Counting. At the centre of the village, a village square, with a giant statue of the Mayor at the heart of it, can be found. Around the square, straw-topped houses and a small marketplace with a well in the centre of it can also be found nearby. North of the square, cows can be found roaming on the nearby farmland. 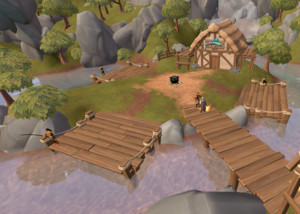 To the west, Martin the fishmonger can be found overlooking Minnow Isle, only accessible by bridge. Fishing spots for raw minnow and davio can be found here. The fish can then be cooked on the island's outdoor stove and subsequently handed in to Martin. 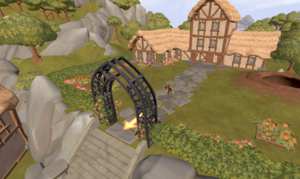 On the east side of Davendale, up a long staircase, the Mayor's inaccessible mansion can be found. Zafir Daven can be found on the staircase. A giant hole can be found in the mansion's courtyard, where trolls are making their way in.

Davendale is one of the current tutorials available for new mobile players. It is currently available through an A/B test. Despite only being able to get this tutorial when starting on mobile, players can simply log into the desktop client to play through it.

This information has been compiled as part of the update history project. Some updates may not be included - see here for how to help out!
Retrieved from ‘https://runescape.wiki/w/Davendale?oldid=35749348’
Categories:
Hidden categories: