Daughter of Chaos is a quest. It is the first quest in the Legacy of Zamorak storyline and continues the narrative following the boss fight with Zamorak, Lord of Chaos. It focuses on Moia following the events of the Elder God Wars storyline.

Speak to Adrasteia in the Falador Castle throne room. Followed by Anne Dimitri in the interrogation room (centre of 1st floor[UK]2nd floor[US]). Teleport to Edgeville and jump the Wilderness wall north of the Grand Exchange agility shortcut. While this quest takes place in the Wilderness, it is an instanced version.

Anne discovers tracks leading to an abandoned warbands camp east of the Red Dragon Isle, where the two of you will spot a faded memory of Moia's which only took place a few days ago. There will be three points of interest surrounding the camp; once all three are visited, return to Anne, who will strengthen the memory slightly and ask you to strengthen it further by collecting six wisps. Once these six wisps are collected, she will ask you to enter the memory, much to your disdain.

There, you'll control Moia and arrive at a Mahjarrat camp led by Bilrach. Moia reports to Bilrach over the decimation of a demon camp near the Black Knights' Fortress with plenty of success, along with eliminating a Varrockian patrol group near the Wilderness border. Bilrach advises Moia not get the wrath of the new Basilissa, but Moia appears to disregard this just as she hears enemies approaching.

When an enemy is killed, they will drop a healing orb, which can be taken to restore health. If Moia's health fully depletes, the player can reattempt at an easier difficulty.

Once the last enemy is slain by Moia, the remaining enemies die off. Bilrach curses K'ril Tsutsaroth for betraying him and trying to wrestle control of the Zamorakian faction before realising that someone is coordinating the attacks and orders Moia to eliminate whoever is doing so. Moia will comply and head off to complete her task.

The tracks will lead to the Red Dragon Isle itself. While the memory found isn't as weak, it isn't strong enough and Anne tasks you with finding memories to strengthen it, done the same as the previous cycle.

In this memory, Bilrach states that the forces of the Chaos Temple were eliminated by demons from the north and west, and thus has decided to fall back to Daemonheim, much to Moia's anger. Moia reports that she discovered some stragglers and Bilrach orders her to finish them. There are six enemies, consisting of two each of witches, demons and cultists.

Once the last enemy is killed, Moia will remark on looking for survivors; a wounded cultist will be near the two demons. Moia interrogates the cultist, learning that Avaryss, the Unceasing is coordinating the attacks from the Infernal Source Dig Site. Moia then proceeds to drain the cultist of energy before Adrasteia seemingly appears before her, before she reappears as Trindine. Trindine laughs at Moia for following a senile fool and scuttling across the Empire's ashes. Moia states that she knows her purpose and that Trindine serves an irrelevant time. Trindine then offers assistance, stating that she doesn't really have much of a choice as demons simply come back when they die. She offers her a diabolus (phylactery) but refuses to divulge what she wants in return. With no other choice and seeing that they could bargain with K'ril and strike fear into his other generals, Moia accepts.

Moia then informs Bilrach of her development. Bilrach is surprised, having expected better of her but orders Moia to deal with her painfully. He asks if she has anything else to report, but she doesn't.

The two of you will arrive at the Wilderness Volcano crater where both of you spot a massive rift and that Moia was just here; however, the rift is sealed, so interact with the memory.

You will control Moia again and confront Avaryss at the Hydra's Gate, who summons four chaos demons to assist her. Moia will use the diabolus to kill the chaos demons and capture their souls, much to Avaryss' shock as she demands where she got it from. Avaryss has 500,000 health; unlike the normal encounter, she uses magic.

Start with Blast to quickly deal 25,000 damage, then Avaryss will summon two greater demon reinforcements after a few seconds, both of whom have 80,000 health. Killing these greater demons will each drop a healing orb that restores 2,475 lifepoints. She will periodically surge across the arena and may drop chaos vortices, expelling damaging magic. Vault away from these while using Drain and Blast to survive and end the encounter quickly.

After dying, there is an option to make the battle easier, just like the previous combat encounters. Wearing the Armour of Trials does not reduce damage after death.

Once Avaryss' health reaches 0, she states that the other Zamorakian Mahjarrat would never treat her as an equal before Moia absorbs Avaryss' soul into the diabolus.

While you were investigating the memory, Anne managed to break the seal on the portal and had brought you inside, where Moia is still waiting and reveals Anne as Trindine. Regardless of your choices, Moia states that she is tired of being disrespected and treated improperly, and thus plans to make Gielinor fear her new powers. She will open a rift out of the Source, which you and Trindine will follow; however, you'll end up back where you started to track Moia.

Trindine will tell you to inform Adrasteia of the development. She can be spoken to further, upon which the Zarosians had affiliated with Adrasteia as they wanted to strive for peace and wanted to help her traitorous brethren out to ensure that both they and the demons would continue fighting and killing each other instead of harming bystanders. However, she had miscalculated Moia's threat but plans to continue monitoring both Bilrach and Moia's actions.

Return to Falador and inform Adrasteia of the news. Adrasteia had her suspicions of Anne being someone else, but does admit that the Zarosians are aligned with them in achieving peace, whereas the Zamorakians only want destruction. She intends to call you once again once she has another plan ready, rewarding you for your efforts. 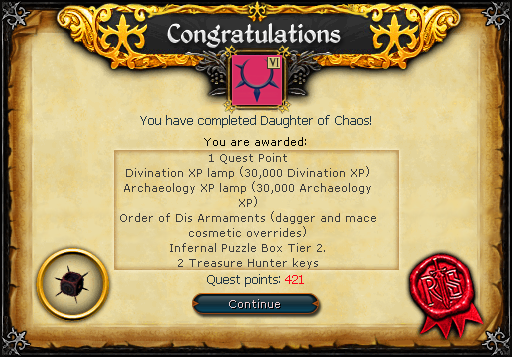 Daughter of Chaos is not currently required for any quests or miniquests.

This information has been compiled as part of the update history project. Some updates may not be included - see here for how to help out!
Retrieved from ‘https://runescape.wiki/w/Daughter_of_Chaos?oldid=35883906’
Categories:
Hidden categories: