Dark wizards are Zamorakian mages that use low-level magic. These wizards are a great way to collect runes for free players. However, they are an inefficient source on member worlds as there are many better ways.

They play a small role in the Demon Slayer quest. 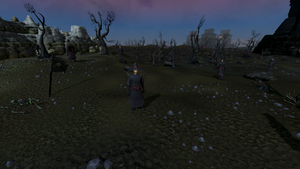 Dark wizards located in the Wilderness.

Warriors attacking in metal armour will not have an effective defence against the wizards' spells. However, rangers with ranged armour would have an advantage. Mage-to-mage duels are also effective. Note that dark wizards cast magic at a slightly faster rate than players normally do. This difference can be observed by autocasting spells on them.

The wizards sometimes will constantly cast Confuse or Weaken on a player until the spell is successful. Since their casting is generally inaccurate on players with decent magic defence, they tend to do very little damage for long periods of time.