From the RuneScape Wiki, the wiki for all things RuneScape
Jump to: navigation, search
The Old School RuneScape Wiki also has an article on: osrsw:Dark energy core
This article is about the monster. For the boss collection log title, see Dark Core. 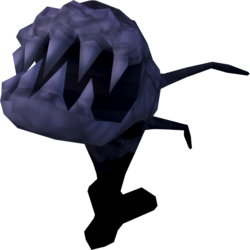 The dark energy core is summoned during the fight with the Corporeal Beast. When the core appears is dependent on how many players are in the room and how fast the Beast is losing health. The dark energy core leaps at a player and chases them around the room until it is killed, although it will quickly be summoned again as there is no limit to how many times the Corporeal Beast can summon the core during the fight.

The core does not attack with any combat style; instead, it deals rapid, typeless damage to all players within a 3x3 radius of it as well as draining some prayer points with each hit. The core transfers damage dealt to players as health for the Beast. The low amount of health the core has means that it can easily be destroyed through area of effect abilities, most commonly Hurricane and Quake. Additionally, the dark core may be poisoned to incapacitate it; the core will not attack and will not heal the Corporeal Beast while poisoned, though its low health pool means it's far easier to destroy the core outright than to keep it poisoned.

The update history project is a work-in-progress – not all updates to this topic may be covered below. See here for how to help out!
Retrieved from ‘https://runescape.wiki/w/Dark_energy_core?oldid=29793159’
Categories:
Hidden categories: