From the RuneScape Wiki, the wiki for all things RuneScape
Jump to: navigation, search
This article is about the game. For the cape override, see DarksCape (override). 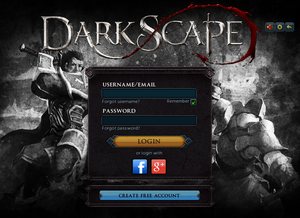 The login screen for DarkScape.

DarkScape was a variant of RuneScape, announced on 16 September 2015. It was a fork of the main RuneScape code as of late May 2015,[1] featuring an open PvP environment without "safe zones". Furthermore, only Legacy Mode combat was available; everyone started at combat level 3; and progress in RuneScape did not affect DarkScape in any way.

All content released in RuneScape at that point was available to both free-to-play and pay-to-play players in DarkScape; however, members received 50% more experience than free-to-play players for all actions (including once-off actions like quest rewards), had double bank space, and could keep 1 more item when dying.[1] High level guards wandered the low-threat and medium-threat areas of the world, attacking anyone who had a skull. These guards did not exist in the high-threat areas, some guards would avoid these areas.

DarkScape used the same servers and world numbers that the Beta used, and Clan Chats were available, although DarkScape clans were independent from the main game.

It was announced on 29 February 2016 that it would close on 28 March 2016, following a lack of interest.[2] An email was sent to players who had played for more than 10 hours regarding this, with a free cape and a month's membership in RuneScape as compensation. In addition, those who had played for over 10 hours prior to the announcement were given an XP cache in the live game, which when opened grants them 50% of the experience they gained in DarkScape, however this would only apply skills they had at least 20,000 experience in.

Some resources were removed/disabled in certain areas. More beneficial resources, such as sharks or yew trees, were instead found in dangerous areas such as the Wilderness. This also included monsters, such as grotworms and even the Queen Black Dragon. Lodestone teleports could only be used with no items equipped or held and the teleportation animation for all teleports was slower and could be interrupted by combat. 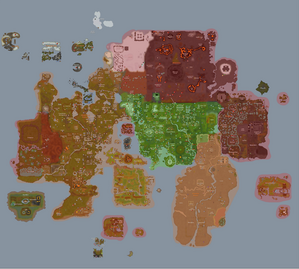 There were three tiers of areas in the world: low-, medium-, and high-threat.

Low-threat areas had varying risk levels, meaning that players could only attack other players within a certain level of their own combat level. For example: In a risk level of 3, a level 50 player could attack players between levels 47 and 53. The risk levels on the surface ranged from 1 to 29, which was determined by a location's distance from the centre of a major city. Some quest areas were designated as low threat, but had 99 as the attacking range. Low-threat areas contained high level guards in towns, as well as patrolling the roads. Low-threat areas could be identified by a green shield.

In medium-threat areas, there were no risk levels, meaning a player could attack any other player, regardless of their level difference. Guards were stationed only in towns, and did not patrol roads. Medium-threat areas could be identified by a red shield and a single sword.

High-threat areas also lacked risk levels like medium-threat areas, except guards were not present at all. Two common examples of high-threat areas included the upper and basement floors of some buildings, as well as the Wilderness. High-threat areas could be identified by a skull and two crossed swords. Some safe areas in the original game were changed into high threat areas, such as Player-owned houses and the Rune Essence mine.

The Wilderness was unique in DarkScape, in that the minimap was disabled and a dark overlay was placed to greatly reduce visibility. However, blocking of teleportation in high level Wilderness in the original RuneScape was disabled here. 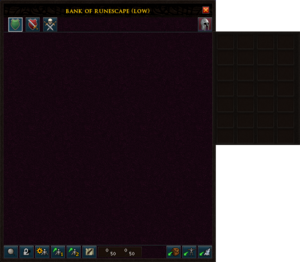 The Bank system in DarkScape was considerably different from the main RuneScape bank. Banks contained 3 static tabs for each of the three risk areas and it used to be impossible for players to access the different bank tabs. This was later removed when the players did not want to smuggle their items between risk zones.

Only bronze hatchets and pickaxes could be stored on the toolbelt.

Level 831 Guards with 1,000,000 life points patrolled every major area. These guards wore a recoloured version of the Colossus armour and could attack with chaotic weapons from any side of the combat triangle. They intervened in player fights, and attacked those who initiated fights. They could drain a player of all their prayer points, prevent teleporting and movement, and even follow players who tried to escape. 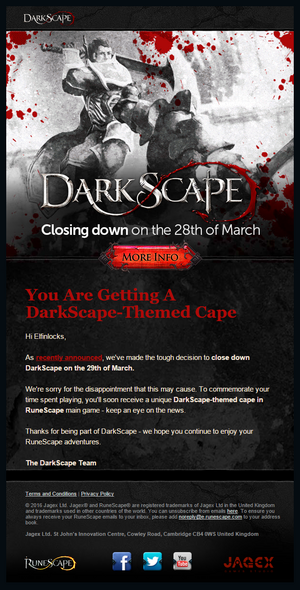 The email sent after closing