From the RuneScape Wiki, the wiki for all things RuneScape
Jump to: navigation, search
The Old School RuneScape Wiki also has an article on: osrsw:Knight (Falador Party Room) 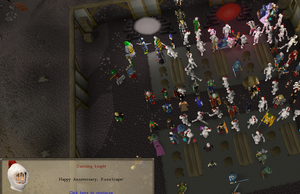 Knights during the 10th anniversary 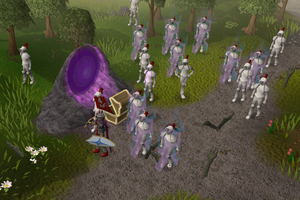 The Dancing Knights are a group of six white knight NPCs who will appear in the Party Room, located in north-east Falador. The player can summon the knights by pulling a lever near the Party Chest and selecting "nightly dance", which costs 500 coins. Once summoned, all six knights will dance on the table in unison and sing a song about how they dance and dress. The dance consists of the twirl emote and a shortened yes emote. 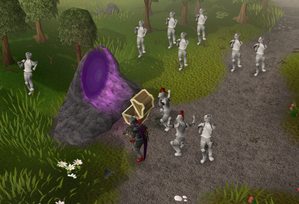 If you try to talk to one of them during their performance you will receive a message saying "He is too busy dancing to talk!"

The dancing knights were most likely added to the party room to help create a party atmosphere during parties in the party room. The knights are summoned during major events, due to the cheap price to summon them and because of the mass number of players present.

The dancing knights were formerly located in Seers' Village, though they moved to Falador with the rest of the party room when the courthouse was added for King's Ransom. Before they were moved, they were members only, since only members could access Seers' Village.

The following text is transcluded from Transcript:Dancing Knights.