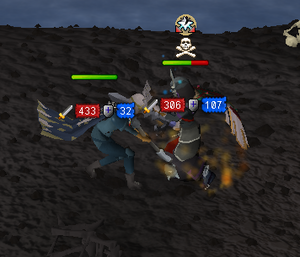 Two players fight each other and some damage is soaked

Damage soaking was an update to the Defence skill as documented in the December 2010 Behind the Scenes update. Damage soaking was added to the majority of head, body, leg and shield slot equipment. No other equipment slots were affected. Armour would soak any damage above 200 life points by a certain percentage. The first 200 life points of damage would not be soaked at all, regardless of the total amount hit.

This update was designed to rectify an imbalance between the potential damage per minute (DPM) and damage capacity (DC) of higher-level players. The rate of damage dealt at high combat levels was far superior to the rate of damage that could be withstood with certain armours and prayers, especially when in a multiplayer environment. Previously, NPCs and monsters dealt with this by having life points totalling way beyond 990. The update helped reduce all damage over 200 life points as higher level equipment would provide higher damage soaking levels.

It should be noted that no Dungeoneering equipment had damage soaking.

Damage soaking did not apply to all damage dealt, but the damage which was in excess of 200 life points. The soaking percentage was applied to the excess damage, and did not occur if the hit was under 200. A common misconception was that a hit of 200 would activate the damage soaking for a flat soaking rate, or that the soaking effect was random and did not always occur on hits above 200.

This formula meant that smaller hits from faster weapons would be reduced by smaller amounts, and that multi-hitting weapons (such as Dragon claws) were able to avoid much of the soaking, as the individual hits were rarely above 200.

The basic concept was that should a large amount of damage be dealt in a single hit, the armour would absorb some of that damage.