From the RuneScape Wiki, the wiki for all things RuneScape
Jump to navigation Jump to search
For the achievement, see Damage Control (achievement).

Damage Control is a part of the Tales of the Arc miniquest series.

Speak with Bosun Higgs about the Damage Control miniquest. She tells you that you and the crew are going to Goshima. Cora works for Goshima's Khan and her brother was left on Goshima by Jed, so that is where you are going. Jemi says the ship needs repairs before setting off because the waters around Goshima are too dangerous. Higgs gives in and says she will repair it, but that they'll need cannons too.

Speak to Rosie on Waiko about repairs and a cannon. Rosie tells you it costs 2,500 chimes to repair and you agree that is a fair price. However, she declines to supply cannons for she is a trader, not a pirate. She suggests that since you cannot buy a cannon, you should salvage one on Goshima instead. Rosie gives you a ship repair kit. Give the repair kit to Higgs and talk to Higgs to relay the information from Rosie. You set sail for Goshima. 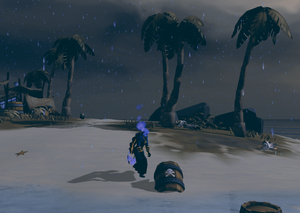 Looting some gunpowder from the beaches of Goshima.

You arrive on Goshima, speak to Bosun Higgs before starting to search otherwise the items cannot be obtained. Search the island for parts that may be used to construct a cannon (these will not appear as items on the ground but rather as interactive scenery):

A malignant entity wanders around the coast and will first drain player's running energy, then prayer points, and finally life points in that order. If players die to the entity, it is a safe death, and the player will reappear on the docks of Goshima.

Once everything has been collected, talk to Bosun Higgs. She will confirm that she is able to make a cannon from the parts collected. She will also discuss the contents of the note: the note is from her brother, Jacob, who has sailed farther east to the Skull. He bids his sister to go home but she won't give up and decides that she is going to stay part of the crew to eventually get her brother.

Damage Control is directly required for the following quests/miniquests:

This information has been compiled as part of the update history project. Some updates may not be included - see here for how to help out!
Retrieved from ‘https://runescape.wiki/w/Damage_Control?oldid=35794094’
Categories:
Hidden category: