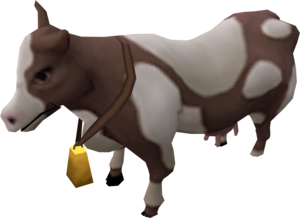 A player milking a dairy cow

A dairy cow is a cow that the player can milk with an empty bucket in their inventory to receive a bucket of milk. For more information, Gillie Groats by the northern Lumbridge cow pen will explain more about milking.

Before dairy cows were released, ordinary cows could be used to gather milk.

A dairy cow talks to the player during Cold War. During and after completing Cold War, players can steal cowbells from them. The Prized dairy cow can be milked for Top-quality milk, which is used in the Cook's Assistant quest.