From the RuneScape Wiki, the wiki for all things RuneScape
(Redirected from Daily challenges)
Jump to: navigation, search
"Challenges" redirects here. For the special assignments given by slayer masters, see Slayer/Challenges.
For the old system, see Challenge System (historical).

The Challenge System is a system intended to suggest skill training methods to players. It was released on 19 September 2012 and reworked on 16 December 2019. It can be accessed using the third tab in the Adventures interface, labelled "Challenges". 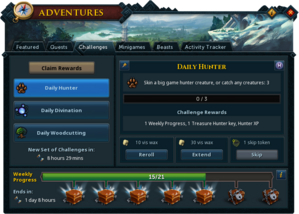 The first time a player logs in each day after the daily reset at 00:00 UTC, they receive several messages, appearing in their chatbox and containing summaries of their active challenges (for example: New Daily Challenge: Prayer - Daily Prayer (0 / 25)). These messages are not filterable. Players can check the details of their active daily challenges by clicking on the third tab from the left in the "Adventures" interface. The newest challenge is at the bottom of the list.

Additionally, it is only possible to have one challenge active at a time for a specific skill.

After completing a Daily Challenge, players can open the Challenges interface and click the "Claim rewards" button to be awarded experience equal to that of a huge XP lamp (75% experience for free players) in the skill related to the challenge and a Treasure Hunter key (the latter only available for members). In cases where multiple skills are involved, such as with combat, players will be given a Challenge XP Lamp from which to choose which skill to earn experience in.

The following is an experience table detailing the number of experience received from completing a challenge for any given skill level:

Players can also talk to either Fara in Burthorpe just south of the bank chest, Heriau in the Tower of Voices in Prifddinas, or Rashida in the center of the Menaphos Plaza near the lodestone, to receive the reward.

Note: If the player completes the challenge but allows it to expire, they will NOT be rewarded for their efforts.

The reward experience is calculated when receiving the challenge, not when handing it in. If the player levels up before handing in the challenge, it will give the same experience it would have at the previous level. If a member's first login of the day is into a free-to-play world, if they receive a challenge in a members' skill, it would be appropriate to the capped level (5) instead.

By talking to Challenge Mistress Fara, Rashida, or Heriau, players may choose to block receiving new challenges in any skills that have maxed levels. For this purpose, 120 Dungeoneering, Slayer, Herblore, and Farming count as maxed. Each skill has its own toggle, so players can choose to block some skills while keeping others assignable. Blocking a skill will not remove challenges for that skill that have already been assigned.

For non-members, having member's skills at level 5 (with the exception of 20 for Archaeology) counts as "maxed" and they can be blocked.

Note: if the player has, for example, six skills not maxed, then the player can still have four placeholder skills which will result in the fifth challenge being in one of the two remaining skills. Simply choose the four that are least desirable and complete the new challenge (in either of the two most desirable skills) daily.

Warning: If fewer than six challenges are unblocked and none of them have been completed, this message will appear: You missed out on a new Daily Challenge because you already have an active Daily Challenge in all of the skills you have not disabled.

Members can reroll or extend daily challenges from the Challenges tab using vis wax. A reroll costs 25 wax and an extension costs 50.

An extended challenge will be doubled in length, and the player will receive double the experience reward. A challenge can be extended after progressing on it or even after completing it as long as it has not been handed in.