From the RuneScape Wiki, the wiki for all things RuneScape
Jump to navigation Jump to search
Dahaka (Aughra elder)Dahaka? (edit)? (edit) 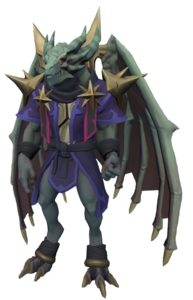 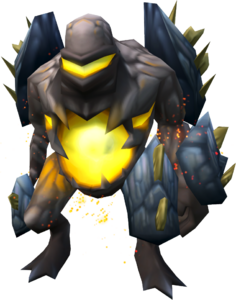 Dahaka is an Aughra elder dragonkin which features in Desperate Measures and Twilight of the Gods.

Dahaka was one of the Dragonkin who survived The Great Revision by hiding in the Abyss. She urged caution alongside the Nodon on dealing with the Elder Gods. When Kerapac went about his own methods, he cursed the entire race. Dahaka could not stand the suffering and fled to the Abyss, where she ended up possessing a prehistoric abyssal.

The following takes place during Twilight of the Gods.

Dahaka joined Cyrillus and Yk'Lagor in emerging into the Senntisten Asylum in order to find a way to restore their former selves, now that the curse had been lifted from the Stone of Jas's destruction. With the help of the abyssal savages and their beasts, they attempted to find a worthy cure for the chthonian ailment referred to as Superimposed Personality Disorder.

When the World Guardian alongside Gregorovic and Naressa arrived, Dahaka and the others coerced them to help find anything that might work as a cure in the Asylum. The World Guardian successfully recreated a cure and returned Gregorovic, actually a chthonian demon named Erasinus, along with Senecianus who showed up shortly afterwards, to their original forms. The Aughra took the cure back to the Abyss so they could attempt to use it on the rest of their superimposed clan, and told the World Guardian and Naressa about the Avernic demon armies marching off from Infernus.

This information has been compiled as part of the update history project. Some updates may not be included - see here for how to help out!
Retrieved from ‘https://runescape.wiki/w/Dahaka_(Aughra_elder)?oldid=35849838’
Categories:
Hidden categories: