It is located south-east of Daemonheim. To reach the island, follow the water edge south from the boat to Al Kharid until a dead end is reached. The dungeon door to the island can be found there.

The island includes 9 maple and 6 willow trees, with 3 yew trees and a bank deposit box in the extended portion.

This is a decent place to train Woodcutting and Firemaking at the same time. It is usually not crowded, making it more ideal for training than higher traffic spots such as the one in Draynor Village, with a higher concentration of either type of tree than anywhere else.

This is the only location where non-members can cut maple trees. They can take the boat to Al Kharid, bank, then return via boat, or use the ring of kinship to teleport to Daemonheim to bank and then run back. 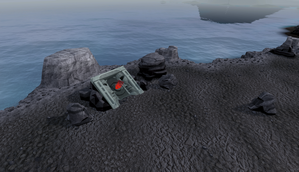 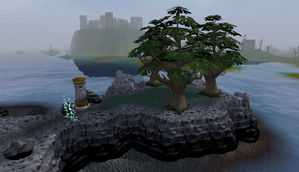 The player can access an extended portion of the island if they have obtained the Daemonheim aura 2 from the medium Daemonheim tasks. It contains 3 yew trees and a bank deposit box, which can be useful since it eliminates the need to leave the island to bank.