From the RuneScape Wiki, the wiki for all things RuneScape
< Daemonheim
Jump to: navigation, search
This article is about Daemonheim before it was released. For for the current up-to-date article, see Daemonheim. 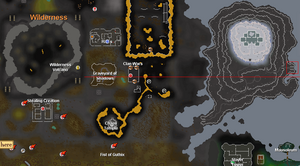 The peninsula and castle in relation to the Wilderness.

Daemonheim before its release was a major subject to speculation and theories along with the strange power. Although it was not accessible until 12 April 2010, the castle first appeared on 22 February 2010 as unexplained mass of land in the Wilderness. It was then known as the Wilderness Castle.

The two Fremennik guards at the western gate (Torsteg and Hilda) were stationed to guard the source of the strange power. Curious players used the Orb of Oculus to view the peninsula finding a series of tents. Observant players made note of the eastern entrance which was inaccessible at the time. Although the guards were removed after Dungeoneering was released, they were re-added on 1 February 2011 with the return of the Wilderness and Free Trade. 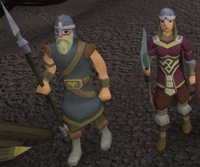 These screenshots were taken prior to the release of Dungeoneering.