From the RuneScape Wiki, the wiki for all things RuneScape
Jump to navigation Jump to search
Rock Island Prison, one of Customs' largest facilities.

The Customs and Excise Office is an organisation primarily responsible for the enforcement of maritime law throughout Gielinor. Stationing themselves in many of Gielinor's more significant ports and coastal settlements, they are largely responsible for suppressing illegal activity at sea.

The Customs and Excise Office is an organisation that maintains a steady presence at any location possessing ports of known importance. Despite being a large organisation devoted to the enforcement of maritime law, there are very few personnel seen by players; the lone officer stationed at Musa point, the lone sergeant at Rimmington, and all of the personnel on Rock Island Prison.

Though the Customs and Excise Office tolerated the pirates, they eventually launched a campaign against them due to Captain Rabid Jack's violent attacks on any ship that they spotted. Even though the remaining pirate factions apparently killed Jack during the Battle of the Archipelago, the Customs and Excise Office continued their campaign against the pirates. A group of officers were responsible for killing One-Eyed Hector and most of his crew.

Like the RuneScape Parcel Delivery Team, the Customs and Excise office has several incompetent employees, those examples being the sergeant at Rimmington and Heavy-handed Harry. The former arrests those who simply claim to be a pirate, and expresses surprise when the people he arrests return to him (apparently not being aware of the massive gaping hole in the prison), while Heavy-handed Harry appears to be oblivious to the hole in the wall, with none of the guards suggesting to have it patched up. 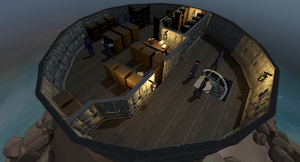