From the RuneScape Wiki, the wiki for all things RuneScape
(Redirected from Customisation)
Jump to navigation Jump to search 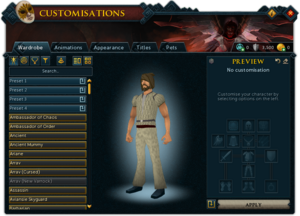 The Customisations interface can be used to change one's garments, animation overrides, appearance, title, or certain pets. The customisation booth appears around the player when changing their facial appearance, choosing animations and changing titles.

Originally the customisation booth only appeared when players were using an NPC to change a part of their base clothing or hairstyle. Thus the booth only appeared in Thessalia's, Yrsa's, Reinald's and the Hairdresser's shops, which allowed players to select base clothes, base shoes, base armguards and hairstyles respectively.

With the opening of the Solomon's General Store on 17 July 2012, players gained access to cosmetic overrides. To allow players to change between these in-game, a menu was added to select them from. On 3 March 2017, the Wardrobe interface was changed to add additional filters and the increasing of keepsake slots from 50 to 100.

The customisation option is accessed through the masquerade ribbon button. Players can change the title that displays next to their name, or select which animations play when performing certain actions. They can also change or remove their cosmetic overrides through the Wardrobe, or choose a new hairstyle and colour under the appearance tab. Players also have access to pets that reside in the interface tab Pets.