The Curse of Arrav is the third quest in the Mysteries of the Mahjarrat quest series, where the player must obtain the heart of Arrav from Zemouregal for the player's mysterious friend, Ali the Wise, in hopes of learning more about the magic enslaving Arrav.

The icy waste to the north of the troll country is as mysterious as any land in RuneScape, no less because of the interest the Mahjarrat take in it. Ali the Wise thinks that he might have found a way for you to discover more about this strange area to the north. Uncover more of the mysteries of the Mahjarrat and learn about the dark magic that was used to enslave Arrav for these last few millennia.

Getting to the tunnels[edit | edit source] 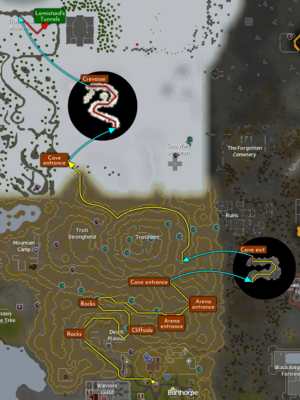 Path to Lamistard's Tunnels from Burthorpe
Items needed: Trollheim teleport (or climbing boots if you cannot use Trollheim teleport), a weapon for a very weak level 180 monster (approximately equal to difficulty of a hill giant), and 7 empty inventory spaces

To start the quest, talk to Ali the Wise in his house in Nardah (the northern-most house), just north of the Temple of Elidinis. Note that until all pre-requisites for the quest are completed, he will not appear here. To get to Nardah, teleport with the desert amulet 2 or above or fairy ring code dlq, and then run south. See here for more travel methods.

After talking with Ali the Wise, the player learns of a tunnel on Trollweiss Mountain. Be sure to ask him, "Where is the tunnel entrance?" before continuing or the cave will be inaccessible. Using the Trollheim teleport or another mode of transportation, go to Trollheim. Walk off the mountain and head slightly east down the narrow path to climb the rocks, then head north-west along the path until a sub-path breaks off to the north. (This is the path used to get to the ice gate in Desert Treasure but keep going north to reach Lamistard's Tunnels. Do not take the path with the boulder, as that leads to the God Wars Dungeon instead.) Go in through the cave entrance and walk through the ice caves. These caves are populated with level 84+ ice trolls, and caution is recommended for lower level players. At the end of the tunnel, head through the crevasse and continue east to the next cave entrance. 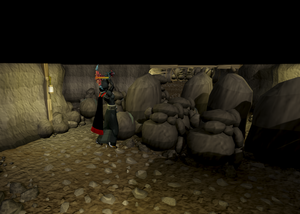 Walk through the tunnel, clearing the rubble. Some pieces must be mined from more than one side to clear them. There are one-, two- and three-rock piles. Some three-rocks may be mined perfectly; some might cause a cave-in to the east. The new cave-in cannot be mined.

Progress is saved, but if the player leaves the cave, the rocks will be reset.

Walk to the room in the east of the cave. Pick up the four tablets on the ground along the way: stone tablet, granite tablet, slate tablet, and shale tablet. It is recommended to bank the tablets at the next convenient point so that they can be given to Ali the Wise after the quest. 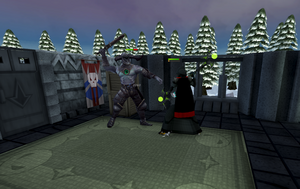 Once in the basement, search the bookcases to get notes (a-j) about the Mahjarrat and go up the stairs. Be sure to have two open inventory slots before going up the stairs and fighting Arrav. Speak to Arrav, but he cannot control his body, so he starts to attack. He has a combat level of 180 and attacks with Melee, so Protect from Melee is suggested. He will talk between every few attacks. 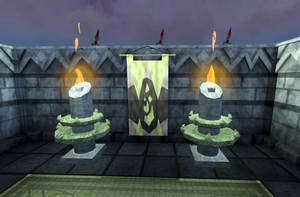 The 'flame tapestry' in the top left corner must be searched

When Arrav has about 50% of his health remaining, he will temporarily regain some control over his body, and he will give instructions to search the flame tapestry in the southern room. Zemouregal will then call him, and he will be teleported away. Head to the room directly south and search the tapestry on the western wall with the candles next to it to receive a Base key and the Base plans.

Return to Ali the Wise in Nardah. Show him the base plans, and a cutscene will start of Ali explaining all the traps in the base and a walkthrough of where to go.

From Ali the Wise's house, head north-east to the Uzer Mastaba. Senliten is located on the lower level of the Uzer Mastaba; click the entrance to the pyramid and select the option to head directly to the Pharaoh Queen. If this option is not available, or to do the tomb puzzle again, a walk through is available here.

Talk to the Pharaoh Queen, and she will give instructions on how to make a jar to preserve Arrav's heart and gives an empty canopic jar. The jar now has to be filled with one dose of sacred oil, three dwellberries, and a ring of life, in that order. Be careful when adding the dwellberries: their default left-click option is eat. The canopic jar becomes oil in a canopic jar, oil and berries in a jar, and a full canopic jar as each item is added.

Once completed, return to Ali the Wise with the full canopic jar. He will recommend to wear insulation to stop electric shocks and have a form of surveillance, a grappling hook and a crossbow before entering Zemouregal's base under the Chaos Temple.

Items needed: insulated boots, either a Macaw pouch or a Ravenous locust pouch, a crossbow, mithril grapple, full canopic jar, base key, and armour for protection from Armoured zombies (optional).

Climb the north-western tower in Varrock castle and speak with Hartwin (he's in the same room as Captain Rovin from Defender of Varrock) who will guide the player to the Chaos Temple safely, although you will be in the Wilderness momentarily until you descend the stairs. Make sure to dismiss any pets currently following the player before leaving with Hartwin. Pets will make it impossible to summon the remote view familliar and it is impossible to dismiss them once inside the base (Note: This has since changed at some unspecified update, and you can dismiss them at least in the sewer), forcing the player to return to Hartwin.

Go down the trap door into Zemouregal's base. While dodging the Armoured zombies, follow the tunnel around, going through two doors and a third metal door. The zombies will not have to be killed for the red mist to open the doors again. With the base key obtained earlier from behind the tapestry, this door will now open. Go east to the small side room with a range.

Do not walk into the human detection spells as they will trigger and send the player back to the entrance. Equip the insulated boots and enter the pipe on the south side of the room. With the boots equipped, the sewers are completely safe. If the boots are not equipped or are taken off anywhere in the sewers, the player will be sent back to the entrance of the sewer and be hit for around 150 damage.

Walk until the end of the sewers, where there is a Killerwatt in a cage and another pipe. Try to enter the pipe and a message will appear, saying that the player should try using remote view. Summon a Macaw or a Ravenous locust, stand in front of the pipe, and interact with the summoning familiar to access remote view. "Hide Familiar options" must be off (unchecked) because if they are on, the remote view ability will be inaccessible. A cutscene will occur where the zombies leave. Click continue and then enter the pipe.

(Note: Using Remote View via a summoning familiar is a required mechanic for the quest, which includes special dialogue between the player and familiar; simply using freecam will not function as a replacement).

If this is not completed within five minutes, the zombie guards will come back and kick the player out of the room, though the items obtained earlier will be kept. 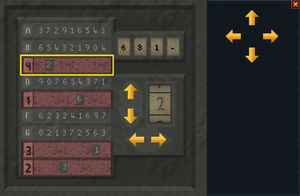 An example of what to do when operating the keypad. (Combination EIHC was used in this example.)

Do not dismiss the familiar; it will be needed again to enter the second pipe if the player fails. Run into the room to the south and search the tables for decoder strips and notes (k-z). Pick the lock on the chest on the south wall of that room for the code key. Then, read the pass key and make a note of the four-letter code. With the decoder strips, go back north to the big door and interact with the keypad next to the locked door. The door uses a decoder puzzle as its lock.

Select strip #1 by clicking on it and drag-and-drop strip #1 over the line indicated by the first letter of the code key. Alternatively, use the arrow to maneuver the strips to the correct position.

Enter the number shown in the hole of the strip. Repeat this for the other three strips and their respective pass code letter. For example, if the pass code is CGBE, then place the decoder strip #1 over the C, by selecting the strip and using the arrows at the top-right, and the remaining number will be the first digit in the code to unlock the door. Repeat this for all the numbers, and then a latch should open. Now open the door and enter. Hide in the room with the tables with the decoder strips if the zombies come back.

If the player fail the password twice, the gas will appear and they will be thrown out of the room and dealt with around 1,500+ damage. Repeat the process above (the remote view sight part) if this happens.

Click on the pipe on the roof to use the mithril grapple and crossbow to bypass the trap. Click on the pedestal, and the heart will automatically be placed in the full canopic jar, turning it into a heart in a canopic jar. Teleport out, withdraw the four tablets (if required), and go talk to Ali the Wise in Nardah to complete the quest. 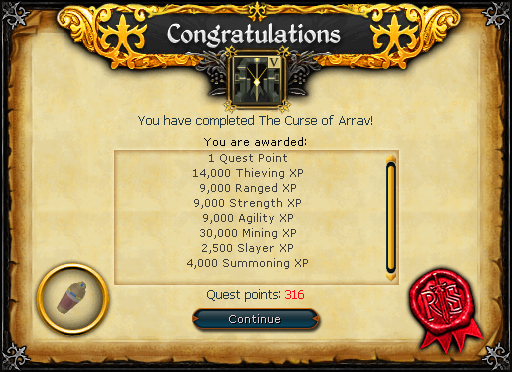 The player can talk to Ali the Wise after the quest and give him additional information, but there are no rewards for doing so. To give him all the information, the player will need to have gathered the four tablets in the tunnel and the two notes of Mahjarrat (A-J and K-Z).

The player can also give him information from the following quests (if they had not been given already following Missing My Mummy):

The Curse of Arrav is directly required for the following quests/miniquests: