From the RuneScape Wiki, the wiki for all things RuneScape
Jump to navigation Jump to search
The Old School RuneScape Wiki also has an article on: osrsw:Curly 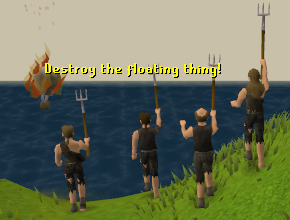 Curly is a peasant seen during the Enlightened Journey. Alongside Larry, Moe and Bob, he forms a flash mob and destroys the Origami balloon that Auguste creates.