Cultists are Zamorakians that follow the megalomaniac demon summoner Denath. During Demon Slayer, after Denath steals a Tome of Demonology from the Edgeville Monastery, Gideon Bede, the caretaker of the library, chases after him. Along with an adventurer, he enters a crypt beneath the Chaos temple in Varrock, where several of these cultists have sealed the passages to protect Denath. Three of them are with Denath reciting the lines to summon Delrith, but they are slain by Delrith after he is summoned and attempts to kill the adventurer and Gideon.

They are rather weak and use Fire strike, but many of them may pose a problem for lower levelled players, as they are aggressive. When they get 50% adrenaline, they will use Asphyxiate, and then they get 100%, they will use Omnipower. 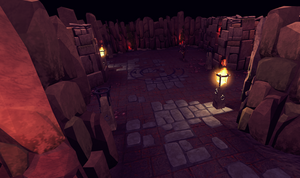 The chaos crypts where the cultists dwell