The crystal halberd is a crystal weapon used by elven warriors. It is a two-handed Melee weapon that requires 70 Attack, 50 Agility, and completion of Roving Elves to wield. 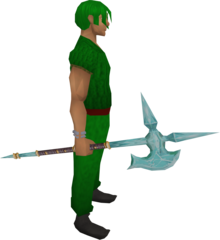 The crystal halberd can be made from a crystal weapon seed in two ways:

The amount of coins needed to create (and repair) is based on the number of times a crystal weapon/armour seed has been made into an item for coins - the cost is shared over all crystal weapons and shields. The first time costs 1,000,000 coins, and each subsequent creation costs 200,000 less until the fifth time (and every time thereafter), when it costs 200,000 coins.

The crystal halberd will revert to seed after 50,000 charges of combat, but uses two charges per hit except while within Prifddinas, where it uses one charge per hit. A partially degraded halberd can be recharged for a fraction of your current creation cost - if it has 90% charges remaining, and the lowest creation price has been achieved, it would cost 20,000 coins to repair.

The elven city guards appear to be wielding a crystal halberd.

For a long time, the halberd was only speculated about, and not actually available as a weapon that players could wield.

The main source of speculation came from Ilfeen when taking an unenchanted crystal seed to her. She said, "I can only make shields and bows. I've been trying to make halberds but I can't get the melody just right yet." This phrase served as a hint that the weapon may be released at some point in the future.

Crystal halberds were referenced in the Game Guide, which told readers that Ilfeen had not yet mastered the enchantment of crystal in that way yet. The crystal halberd was also mentioned by a player in Postbag 9.[1]

The second source of confusion came when viewing the weapons wielded by various elves throughout Tirannwn. Some players believed that the elven warriors wield crystal halberds as they can hit players behind obstacles; however, examining an elf warrior ("I don't wanna be at the wrong end of that pike") suggested that the weapon is actually a crystal pike or spear. Level 122 Mourners also seemed to wield these pikes.

This was an option for the Power to the Players poll 'Elf Quest Rewards' in April 2014, where a weapon was chosen, but it lost to a different reward.