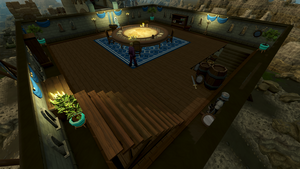 Crown Prince Anlaf is the current ruler of Burthorpe, a small human settlement in northern Asgarnia that is currently engaged in a bloody war with the trolls. Anlaf is the son of King Vallance, the ruler of Asgarnia and an important figure within the White Knights of Falador. He is known to be a lover of puzzles and games, constantly learning new ones.[1]

Political unrest within Asgarnia has recently driven Prince Anlaf to drop from the public eye. Concerned with the possibility of assassination or capture, Anlaf has for some time governed Burthorpe behind closed doors.

Anlaf does not appear in the game, although he is referred to by several characters. He appears in the first RuneScape novel, Betrayal at Falador.

Prince Anlaf was born to King Vallance, although no specific date has ever been given regarding his birth.

As Prince Anlaf progressed into young adulthood, his father felt the time had come for him to experience leadership first-hand. King Vallance gave his son lordship of the town of Burthorpe, a small settlement near the border of the Troll Country. It is possible that Vallance felt that Burthorpe's close proximity to the hostile trolls of the north would give his son a trying but necessary experience in governing.[2] 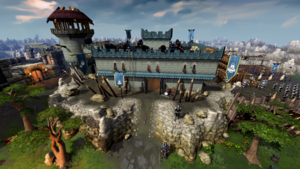 For years Anlaf ruled Burthorpe, raising the Burthorpe Imperial Guard as its primary defence against the trolls in the north, beginning the Burthorpe - Troll Country War. The city's palace was fortified to better resist siege, while a massive series of tunnels and hidden chambers were created beneath it under Anlaf's supervision.

In 162, King Vallance fell very ill to the point he could not appear publicly.[3] With Sir Amik Varze ruling in his stead, the White Knight order managed to gain political supremacy in Asgarnia, immediately declaring the already hostile Kinshra to have no more political power within the nation, despite the aid of their founder, Lord Valzin, in the foundation of the kingdom.[4] For reasons unknown, Anlaf did not succeed his father as King of Asgarnia, and remained in Burthorpe, while the White Knights' and Kinshra's hostilities increased.

In response to the Kinshra's ousting, Lord Milton declared war on Falador, and Commander Daquarius Rennard led a Kinshra force to the forests north of Falador in 163, where they attempted to claim the city as their own. The White Knights retaliated, resulting in the brief Battle of North Falador, which ended in stalemate.

Open hostilities between the two knightly orders, however, would not last long. The even military strength between the two would lead to massive casualties and little progress. Grudgingly, both sides disengaged and returned to their respective fortresses, the White Knights to Falador and the Kinshra to their fortress near Ice Mountain.[5] During the entirety of the conflict, Anlaf would remain neutral.

In early 164, Milton was assassinated. The orchestrator of this plan, a Kinshra commander known as Sulla, claimed the lordship as his own and executed any open opposition within the organisation. Lord Sulla, the now unquestioned leader of the Kinshra, declared the knightly order was once again at a state of war with Falador. He rallied various other organisations, such as Thorbarkin's chaos dwarves to his cause, and began to prepare to attack Falador. The War of 164 began in earnest with the violent sacking of the monastery.

Simultaneously, reports of attacks on travellers surfaced throughout Asgarnia. In secret, a werewolf known as Jerrod had managed to cross the holy River Salve near Morytania under the orders of Tenebra, a vampyre noble, in order to capture his escaped nephew Gar'rth. Unaware of this beast's nature, Anlaf instructed the Burthorpe Imperial Guard to aid the White Knights in finding the murderer as well as charging them with protecting travellers along major roads and passages.

As the Imperial Guard and White Knights began to cooperate for the first time in more than a year, though, Sulla began to corrupt the Burthorpe government from the inside. Employing a dark-hearted sybil, Sulla managed to send disturbing dreams and visions to the Prince, thus tormenting his mind. 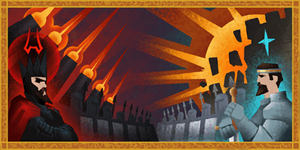 Tapestry depicting the Siege of Falador.

As Anlaf became increasingly burdened by this, his mental and physical health deteriorated. He mostly resigned himself to his private chambers, and the dreams that afflicted him became progressively more violent, telling him to turn to Zamorak and aid the Kinshra in their war. In a small hidden chamber near his bedroom, Anlaf constructed a crude chaos altar, where he made several animal offerings. Hesitant, Anlaf continued his stance of diplomatic neutrality, to the outcry of Burthorpe's people.

Following the gruesome Taverley Massacre by Sulla's goblin allies, the Lord led his massive forces to the forests north of Falador. Enlisting the help of various goblin tribes, the chaos dwarves and their dangerous mortars, the Wilderness Berserkers and a number of Wilderness Mercenaries, Sulla had gained an army that far outmatched that of Falador. Falador, in response, extended its diplomatic arm, gaining the support of the Ice Mountain Dwarven Colony (though only after the battle had begun), and establishing a city militia. The Siege of Falador would prove one of the bloodiest battles in modern history, with thousands of deaths on either side.

Meanwhile, Commander Daquarius had led a Kinshra embassy of nearly a hundred armed knights to Burthorpe in order to delay Prince Anlaf on Sulla's orders. They were met by his elderly advisor and long-time friend Lord Amthyst, who told him that Anlaf was unwell but would meet him at the earliest opportunity. Amthyst was accused of slowly poisoning the prince and immediately arrested by the Kinshra. Uncharacteristically, Daquarius demanded Amthyst be executed.

Daquarius and his men approached Prince Anlaf in his chambers, where they explained the fabricated story of Amthyst's efforts to poison him. Anlaf, despite being emotionally strained by this information, revealed his hidden altar to Zamorak in a tunnel beneath the palace to Daquarius, before which the two of them knelt and prayed to the chaos god. Anlaf ordered the Imperial Guard to return to their homes unarmed, but their commander, Lord Radebaugh, and a regiment of six hundred guardsmen disobeyed and travelled south towards the battle, where they eventually met Squire Theodore, who convinced Radebaugh to join his party and fight for Falador. Daquarius would remain stationed in Burthorpe for the remainder of the Siege, which, days later, ended in Pyrrhic Faladian victory. 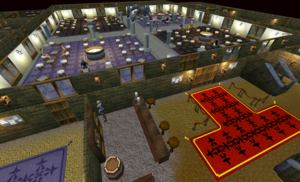 The prince's games room, situated deep beneath the castle.

Following the defeat of the Kinshra and the flight of Sulla and Jerrod, Daquarius, who had peacefully left Burthorpe with his men when the Siege was over, was unanimously elected new Lord of the Kinshra and had Sulla's sybil deposed of.[6] Soon enough, Anlaf regained his normal mental state as well.

Despite the Imperial Guard's extremely important role in Falador's victory, they continue to be political rivals of the White Knights to this day. Currently, it is of vital importance to Burthorpe that they win the war against the ever-invading trolls of Death Plateau, seeing that this is the only reason the principality continues to receive funds from the White Knights, who would otherwise exclusively focus on their war with the Kinshra and take over Burthorpe.[7]

In 169, Anlaf opened what was formerly the private Burthorpe Games Room to the public. Here he hoped that gamers from all over Gielinor will engage in friendly competition.[8]

In year 7 of the Sixth Age the goddess Seren gathered a council for a meeting at Anlaf's castle, most likely with the prince's accept, although Anlaf himself did not participate in the meeting. Instead Major Mary Rancour acted as representant of Burthorpe as well as being in charge of providing the security for the council's members.