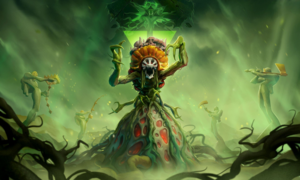 Promotional art featuring the Croesus, with Bik looming in the distance

The Croesus Front is the third of four fronts of the Elder God Wars Dungeon, released on 27 September 2021. The front has no requirements to access; however, levels 88 and 92 in Fishing, Hunter, Mining and Woodcutting are required to interact with the skilling nodes outside the boss area, while levels 80 in those skills and Construction are recommended for the boss encounter.[1][2] Additionally, the completion of Sliske's Endgame, Desperate Measures, and City of Senntisten, as well as their prerequisites, is recommended for a better understanding of the story, as the front is considered the next instalment in the ongoing Elder God Wars narrative.[3]

The Croesus Front features the third assault on the cathedral in Senntisten, where united forces of young gods keep the eggs of the Elder Gods from hatching and destroying Gielinor in the process. The attack to the east of the cathedral is led by Croesus, the game's first skilling boss, revived by Bik after being buried beneath the city's graveyard since the Second Age. The fungal spread has killed most of the forces on this front, with Gorvek leading the defence.[4][1]

For the duration of the first week after release, Jagex instated a Free death week, despite Croesus being a safe encounter. [4]

The Croesus Front is located in the eastern section of Senntisten, which can be accessed by the ancient door north of the Archaeology Guild and directly east of Tolna's rift. After entering Senntisten the player needs to access the cathedral to the south of the entrance and then leave through the eastern cathedral door. Passing through the eastern door for the first time will trigger a cutscene. 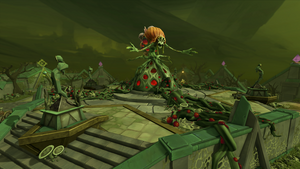 Croesus is an ancient fungus brought to Senntisten by an expedition from the Unquiet Ocean in the Second Age. Intended to be used as a weapon, it broke free, killing fifty thousand people and nearly destroying the Tenth Legion until it was buried beneath the earth by Zaros. Croesus is the game's first skilling boss and can be taken by a many as 18 people in either public or instanced encounter, although the recommended group size is 8 players. The boss cannot be killed and needs to be put to a dormant state. To do that the players need to clear fungus from the graves of four heroes from the Second Age who have been buried with corpses of the beasts they slayed. Clearing the fungus from the carcasses reduces Croesus' strength, however the fungus can grow back, which can be slowed by using the collected rotten fungus. After collecting enough materials, the players can restore four statues and pray to them to subdue the boss, which grants access to the core fungus, which needs to be destroyed to complete the encounter.[1][4][2]

The boss does not deal damage and the players cannot die in the encounter, however the fight can be failed, as Croesus' attacks lower their skill levels. The drain can be reduced by wearing the shadow pontifex ring upgraded with resonant anima of Bik and the levels can be restored using potions. While the nodes inside the boss area have no requirements to interact with, they are balanced around level 80. The lower the levels, the higher the chance of failure. Experience and rewards from the encounter are based on personal contributions, however a lower number of players in the fight allows for more contributions than massing. The rewards are placed inside a chest. Ironmen can take part in the activity alongside the regular accounts. The boss does not have a hard mode version.[1][4]

While Croesus is a skilling boss, it does have all the features of a regular boss, including a skilling category of Soul Reaper assignments, a boss pet, a collection log with a title and a boss portal.[1][4]

Unlike the previous two fronts, the Croesus Front does not feature combat encounters. Instead, the first area of the graveyard includes gathering nodes which require level 88 in respective skills to harvest from standard versions and level 92 for enriched variants. The enriched nodes appear occasionally in place of the regular nodes and last for 90 seconds. The change between the regular and enriched state interrupts the skilling action and the current version of the node needs to be clicked again. The nodes can also temporarily deplete.

Various fungi can be harvested from these nodes, which can be used to feed animals at a player-owned farm. They are also used to create various rewards, including the skilling off-hands, seed bag, as well as a number of potions and soups. While skilling in the front, players can receive the resonant anima of Bik as well as Bik Elder Troves of the tier based on the tier of the pontifex shadow ring[1][4][2][5]. Additionally four lore books can be found while interacting with any of the nodes.

Potions can be brewed with Herblore using fungus.

Soups can be cooked with enriched fungus.

Throughout the Croesus Front, several allied NPCs can be found, providing additional narrative background or gameplay options. The main defenders of the front are Lumbridge and Varrock Guard, although most of them were killed by Croesus, with the survivors recovering in the Cathedral.

The third front of the Elder God Wars Dungeon was first teased on 17 September 2021 with a short animation of the front's artwork background and ominous ambient sounds, as well as the message It feeds on the dead....[6] A newspost published on 20 September announced that the front will be revealed the next day during a livestream featuring an artwork from artist Nina_Ray. The stream began with a trailer of the front, revealing its name and release date.[7] During the stream the developers showcased the front, including the cutscene, the skilling area, the boss area and revealed the rewards.[4] The information from the stream were also published in a newspost on the same day.[1] On 24 September another newspost with further details was published alongside an introductory video.[5]

The theme of the front was teased in game with the release of Senntisten Dig Site, mentioning a dangerous fungus which tried to consume and infect the city, before it was defeated and contained beneath a graveyard located to the east of the cathedral.[8][9] In the gods' dialogue in the cathedral released on 20 September, Seren also referenced the graveyard as well as trying to reinforce the east flank with the Varrock and Lumbridge guards.[10][11]

The Croesus Front was developed by Mod Shrew and Mod Sponge.[12][4] The environment was created by Mod Alex.[13]

With the release of the Croesus front, The Nodon Front and The Glacor Front received multiple visual changes.