From the RuneScape Wiki, the wiki for all things RuneScape
< Croesus
Jump to navigation Jump to search

Croesus is a skilling boss focused around Fishing, Mining, Woodcutting, and Hunter. The encounter is considered to be safe, as the player passes out instead of dying and is simply removed from the arena in the event of failure. The boss has a very generous drop table with very little investment on the player's side.

The boss has two phases: the skilling preparation phase, and the killing phase. The skilling phase occupies most of the encounter's duration, while the kill phase consists of damaging the core of the boss. As it is a skilling boss, wearing one of the four elite skilling outfits can prove beneficial, especially the combined sets - fury shark, magic golem, nature's sentinel, and volcanic trapper respectively, as they provide additional experience and better resource harvest rates.

Legendary skilling auras, especially tracker, lumberjack, and call of the sea are also beneficial for their respective nodes. Quarrymaster aura is not particularly useful at Croesus since the durability of the mining nodes is extremely small, although it is still useful for its critical hit bonus, which guarantees fungi whenever it activates with an elder rune pickaxe +5 and equivalents.

If a player does not participate in damaging the core, they will not receive kill credit.

Being hit by one of the stat draining attacks will remove the buff from an Extreme hunter potion and automatically shatter any Crystal Mask the player has.

The following table may be referenced to find where resources are obtained and used during the encounter.

), the dagannoth carcass has fungal spores nodes on it and Lumbridge and Varrock guards around it (

), the leviathan carcass has fungal algae nodes on it and Lumbridge and Varrock guards around it (

), and the mole carcass has calcified fungus nodes on it and Lumbridge and Varrock guards around it (

During the entire fight all players should always pay attention to special attacks and avoid stat draining as much as possible. The player has a health bar that is their "primary" health, which is not based on life points. This bar drains when the player is hit with stat drains. If too much stat drains are incurred, the player will pass out and return to the viewing platform near Gorvek. The player's "food" are super restore potions and other potions, which restore the secondary health bar. Communication between players play an important role and increase the chances of successfully ending the encounter.

Croesus' health scales according to the amount of players taking on the boss. It starts off with 10,000 base health and scales with the formula

is the number of players present in the arena when the encounter is started. Croesus will automatically rot and destroy any fungi carried into the fight from the outside in the player's inventory.

In private instances, up to 50 players can fight Croesus, while this is capped at 18 for public instances.

Croesus has a rot bar, located under the health bar, that fills slowly over time. The percentage also increases when players are hit by the special attacks. If the rot bar reaches 100% and the boss is not subdued, a cutscene will play in which everyone in the arena flees as Croesus becomes too strong, resetting the fight. It is possible to finish the encounter if the bar reaches 100% right as the core is exposed, pausing Croesus' attacks, provided that the boss is finished off before the core closes again.

While not necessary, Crystal Mask spell allows the player to safely tank a stat drain attack from Croesus. The mask will wear off if this is the case. Crystal Mask will not protect the player from the stat drain from stepping on a mushroom mine or sliding on a non-glowing mushroom.

Example of a long and short runner: 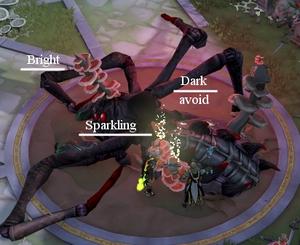 Once the encounter has started, players should focus on depleting the fungi from the large monster carcasses so they can do more damage to the boss.

There are three nodes on each of them - one sparkling, one regular, and one darkened. If the player harvests from a darkened node, they only obtain rotten fungi, and gathering progress is reverted. Therefore, this node should always be avoided. Gorvek will inform the team whenever the carcasses have been fully depleted. When the large monsters are fully depleted, a bar will slowly fill over time, as Croesus will attempt to reinfest their carcasses.

This can be significantly slowed by using 10 rotten fungi on a skilling node on the carcass. Simply rot normal fungi to obtain some, as it is also the quickest and consequence-free way to do so. Gorvek will warn the team if the carcasses are about to be reinfested, and advise players to poison them if not done so already. 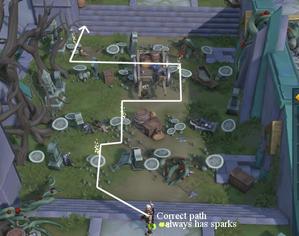 The gathered fungi will need to be transported to a correct statue, forcing players to traverse through piles of mushrooms on all four sides of the arena. The northern and southern sides contain an obstacle course with four mushrooms per row. One of these four will be sparkling, and this is the one that can be safely stepped on. The sparkling mushrooms change every 30 seconds.

During the encounter, Croesus will continually launch attacks (refer to the attack rotation below). These are always fired at the same time, so experienced players will know when to dodge them. When energy fungi appear, everyone must clear them out as soon as possible, as Croesus absorbing them will likely end up in a failed encounter. These also provide massive contribution to the team, so they should never be skipped. 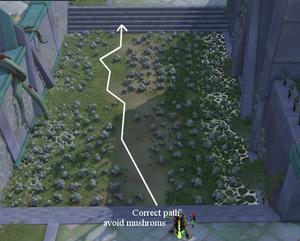 Whenever a statue has all the necessary materials, they can be restored and afterwards can be prayed at. Doing so causes the statue to unleash a blast of energy at Croesus, stunning and preventing it from performing any attack, while opening the path into the middle. This does not stop any active fungi clouds, fairy rings or toxic slimes if present, but it does kill off energy fungi.

Every time a statue is prayed at, it opens the core for 15 seconds for each finished statue. Statues completed as the middle is already open extends the current timer by 15 seconds. Statues can be prayed simultaneously to open the middle within just one cycle, enabling fast kills. Similarly to Big Game Hunter, progress is held if the action is interrupted, although this usually provides no advantage in most cases.

Alternatively, they can be opened consecutively after the middle closes, to prolong the core's total exposure throughout the fight. The latter is recommended when there are many players in the instance or when players do not have high gathering skills to deal significant damage to Croesus.

There is a random mutated skilling node in the middle that the players must interact with to deal damage to Croesus. The possible nodes are mutated calcified fungus (

). This node selected is random, although it stays the same for each individual encounter.

The damage dealt to Croesus is determined by the following:

The "base" damage is the player's (current skill level * 10). Visible stat drain/boosts do count towards decreased/increased damage, so make sure to drink a dose of super restore if stats are lowered and a skilling potion appropriate to the node to boost, although the latter is optional as the boss can be easily subdued with everyone in the arena with no stat boosts or even if a few players lack high skill levels. Damage is only inflicted when an experience drop registers.

While the player harvests from the core, green, white, and red spores occasionally appear from it. If the player interacts with the node when there are green or white spores on it, they will deal 1,000 and 500 poison damage respectively to Croesus. If they interact with the node when there are red spores on it, they will instead heal the boss for 2,500 health. The spores will eventually dissipate after a short duration, although when and what colour they appear as is random. This damage/healing is unaffected by the amount of carcasses cleared of fungi and is individual to each player. Gorvek will warn the team when the core is about to restore its protective layer, which will knock players into a random quadrant if they are still inside when this occurs.

In most teams with all four carcasses free of fungi and no one passed out, three statues is more than enough to subdue Croesus, however it is still recommended to wait for a second set of energy fungi in small teams for additional drop rolls. If a player does pass out in the gathering phase, all four statues should be restored and prayed at, with all carcasses poisoned as a safety precaution.

If too many players pass out in the gathering phase, it is recommended to teleport out and restart.

The rotation starts and 0:15 and special attacks follow with intervals of 12 seconds which means a full attack rotation of roughly 2 minutes and 25-35 seconds. Note that Croesus will telegraph the attack 1-3 seconds beforehand, giving players time to avoid them.

After energy fungi, entire rotation repeats. While the core is exposed, Croesus' attacks are paused.

A minimum of 419 contribution is required in order to receive the maximum of 12 drop rolls after each encounter.[1]

The primary source of contribution comes from removing the energy fungi - these give the most for every player and the team should usually have finished up just after the second set of these. It is recommended for 4-man teams to wait for two sets of this attack before exposing the core, which should be enough for every player to get the minimum contribution for 12 rolls. In 8-man and larger teams, it is recommended to wait for at least one set of this attack.

There are two options for four-man teams: the 2-1 method and the 1-2 method, each assumes you are dodging attacks throughout.

Make sure you communicate with your group which method is used prior to starting the trip. Kills on average should be roughly 6:10-6:30 with little or no mistakes while waiting for a second set of energy fungi.

The steps for the 1-2 method are exactly the same as the 2-1 method, with 2 minor differences:

Note: This size is only recommended when a fourth player cannot be found or all players are extremely experienced.