From the RuneScape Wiki, the wiki for all things RuneScape
Jump to navigation Jump to search
Crested Sillago Snatcher? (edit) 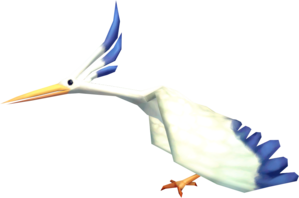 Crested Sillago Snatchers are birds that may occasionally be found on Whale's Maw, north of the east docks, by Hubbub (contracts). When inspected, the bird will be added to the Arc Journal. If all 16 birds have been discovered, the Iago pet will be unlocked after speaking with Odd Billy on Cyclosis.

They spawn on Mondays, at 20 and 50 minutes past every hour, and leave after 6–10 minutes. They are most often encountered while fishing for sillago on the southeastern docks and may sometimes appear at other times instead of the expected time stated before.

This information has been compiled as part of the update history project. Some updates may not be included - see here for how to help out!
Retrieved from ‘https://runescape.wiki/w/Crested_Sillago_Snatcher?oldid=35910873’
Categories:
Hidden categories: