This article is about the scenery object found scattered around Gielinor. For other uses, see Crate (disambiguation). 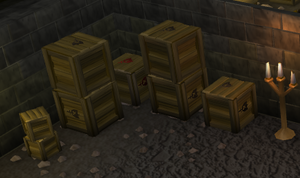 A Crate is an object that players can find in many buildings and a few dungeons in RuneScape. Most crates in Gielinor are supplied by the Karamja Box Company. Crates serve almost no purpose, apart from being used during some Treasure Trails and quests. Clues for Treasure Trails and quest items are often hidden inside of them. For example, a clue might say something such as "Search the crate in a house in Varrock."

Strangely, crates cannot be shot over using ranged attacks or magic. Some find this annoying, considering they would create quite a few safe spots otherwise.

Crates have a "search" option. When searched, crates used to give random items, such as damaged armour, broken arrows, broken staffs, broken glass, leather boots, leather gloves, and small amounts of coins. Now searching crates does not have a purpose, unless they are involved in Treasure Trails, in which case searching them yields a scroll box.

Crates can be found in nearly every city, town, or village in RuneScape. Some areas with a particularly large number of crates include: