From the RuneScape Wiki, the wiki for all things RuneScape
Jump to navigation Jump to search
The Old School RuneScape Wiki also has an article on: osrsw:Crash Island Dungeon
Not to be confused with Ape Atoll Dungeon.

The Crash Island Dungeon is a very small dungeon containing five level 64 poisonous big snakes. The entrance is found in the centre of Crash Island. 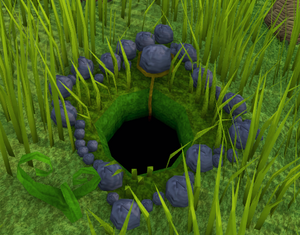 The entrance to the snake pit.

The dungeon is visited during the Recipe for Disaster subquest Freeing King Awowogei. Upon entering the dungeon for the first time, 150 damage is suffered. A rope is already provided to descend into the dungeon for subsequent visits. A rope is in place to exit the dungeon. Logging out or lobbying will also put the player outside the dungeon. A few level 9 snakes are found above ground near the entrance to the dungeon; both types of snake are not aggressive to higher levelled players. 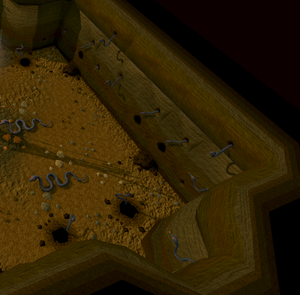 Snakes popping out of every hole when entering the pit.

If you are too close to the walls, the snakes popping in and out of holes can hurt and poison you as well. These snakes are unattackable. Snakes will also pop out of the floor and every single hole in the wall when you first enter the dungeon, but most of them will not pop out after.

This information has been compiled as part of the update history project. Some updates may not be included - see here for how to help out!
Retrieved from ‘https://runescape.wiki/w/Crash_Island_Dungeon?oldid=35744938’
Categories:
Hidden categories: