Crandor is a small volcanic island north of Karamja. It used to be the site of a powerful and wealthy city-state before it was torched by the dragon Elvarg, who was hibernating underneath the island. It is accessed during and after Dragon Slayer, and plays a key role in the quest.

Partial completion of Dragon Slayer is required to access Crandor.

Crandor was settled by humans at an unknown time. It eventually grew to become an influential city-state rivalling Varrock and Falador in political importance. By 129 V, most of the city itself was built on wharfs and piers extending out onto the sea, while the central cove was reserved primarily for its large market. The city was said to trade with every port. Asgarnians, Misthalinians, gnomes, Fremennik, and infrequently even Jogres and Karamjans were known to visit the market.[1][2]

Crandor had developed its own school of magic and possessed one of the largest libraries in the world.[3] They were also well known for their ships, seeing that the island was surrounded by dangerous reefs that required a ship of Crandorian design to be successfully navigated.[4] Many of their people were members of the Champions' Guild, as they also had a strong adventuring tradition.[5] 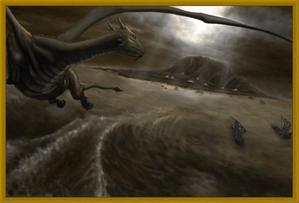 Thirty years before Dragon Slayer, a Crandorian adventurer entered the Crandor volcano, discovered the lair of Elvarg and accidentally woke her. Elvarg, enraged that her sleep was disturbed, defeated the adventurer and emerged from the underground cavern, scorching all of Crandor in her wake. Several Crandorians fled to the shores near Rimmington and set up a camp there, but Elvarg scorched that camp too, leaving three mages as survivors; Lozar, Melzar and Thalzar. The surrounding territories were on high alert in case Elvarg would continue her destruction, but she never did so.[5][1] Duke Horacio considered the destruction of Crandor the gravest genocide of the past century.[6]

Elvarg continued to be active around Crandor following the disaster and attacked many passing ships. The island was much afeared by sailors as a result.[7]

In year 169 of the Fifth Age, three humans attempted to reach the island; an adventurer seeking to join the Champions' Guild, who had hired Ned as a captain and Jenkins as its cabin boy. Elvarg attacked their ship, the Lady Lumbridge, killing Jenkins in the process. The adventurer and Ned were washed ashore onto the island, with the adventurer finding and slaying Elvarg in her lair. Ned was able to escape after the adventurer found a secret passage leading back to the Karamja mainland.

As of the Sixth Age, Crandor remains a desolate island void of human life, now simply inhabited by the undead, demons, scorpions, hobgoblins and moss giants. Structures seem to have included brick walls, tiled floors, and supportive columns. Where the stone was obtained is unknown, although it may be igneous rock from within the volcano. 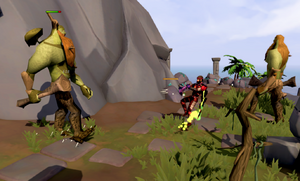 A player fighting a moss giant.

Crandor is home to a wide variety of monsters, each on different parts of the island.

There are ten skeletons on the southern shores, near the crashed ship. Six king scorpions can be found on the northeastern tip, with five hobgoblins to the west of them. Further south on the winding path up the volcano there are three moss giants, and on top of the volcano near the entrance to the dungeon there are a pair of lesser demons.

There is a coordinate clue scroll location on the north side of the island near the King Scorpions.

Crandor also has some rocks in it which players can mine through the Mining skill, which are labelled on the map with a small pickaxe. There are 2 mining areas on the island.

They are possible crash sites for a Shooting Star.

There is also a dungeon underneath the island which connects to Karamja, which is labelled on the map with a red exclamation mark. In it are skeletons, deadly red spiders, lesser demons and Elvarg for the F2P quest Dragon Slayer.

The island plays a vital role in the Dragon Slayer quest, being the location of the fight against Elvarg.