From the RuneScape Wiki, the wiki for all things RuneScape
Jump to navigation Jump to search
"Summons" redirects here. For the skill, see Summoning.
Item JSON: {"edible":"no","members":"yes","stackable":"no","stacksinbank":"yes","death":"always","name":"Court summons","bankable":"yes","gemw":false,"equipable":"no","disassembly":"yes","release_date":"9 June 2010","id":"18757","release_update_post":"Court Cases","lendable":"no","destroy":"Destroying this scroll will clear all the work you've done on the case. You won't be able to access the case again unless you get another court summons.","highalch":1,"weight":0.02,"tradeable":"no","examine":"A summons to the Seers' Village courthouse.","noteable":"no"} 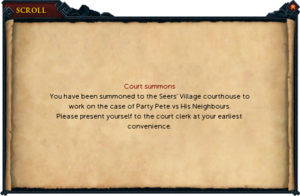 The interface of a Court summons.

Reading the court summons, the player is informed which case has been assigned to them. Players seeking a specific court summons can destroy unwanted summons, allowing for another summons to be obtained. This can be useful for players looking for specific rewards, although it may be faster to complete the case, ensuring the case will not appear again.

Court summons can be obtained through a variety of means:

The following table outlines suggested monsters that can reward a court summons when pickpocketed. This is not an exhaustive list.